Since 1949 the Old Town Hall on Bonn's market square has been used for state receptions, 2015.
Bundesstadt Bonn/Michael Sondermann
In the office of the Old Town Hall, couples are happy to tie the knot, 2018.
Stiftung Haus der Geschichte/Benjamin Westhoff

Bonn’s Altes Rathaus (Old Town Hall) is a symbol of civic self-governance and a historical venue where speeches and state visits were held when Bonn was the capital of Germany.

You can visit the Old Town Hall using the online panorama.
Virtual Tour

Theodor Heuss knew what he was doing when, on the evening of 12 September 1949, having just been elected Germany’s Federal President, he hastily made his way from the government district to the perron in front of the Altes Rathaus in Bonn’s market square. The speech he gave there evoked the day in March 1848 when the liberal revolutionaries Gottfried Kinkel, Ernst Moritz Arndt, Friedrich Dahlmann and Carl Schurz hastily made their way to Bonn’s market square, where they waved the black, red and gold banner of their ultimately unsuccesful revolution. In his speech, Heuss spoke of the “two-pronged overthrow of statehood” in the 20th century and the new beginning that was now being undertaken. He went on: “We accomplished the constitutional act of electing the Federal President a mere half hour ago. […] When the old German heads of state were elected, their election was not definitively validated until they stood before the populace. […] This gathering here tonight is not only a sequel to what has been taking place in the Bundeshaus, but is also, in my view, an integral part of it.” 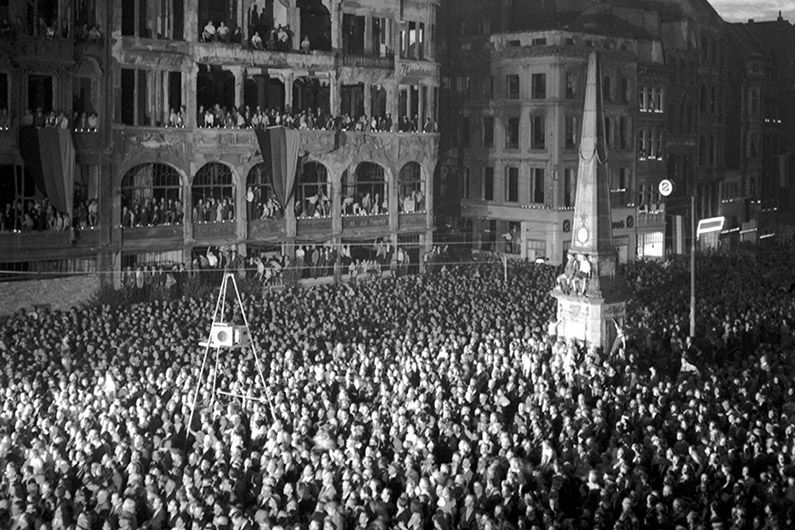 After his election as Federal President of the Federal Republic of Germany, Theodor Heuss was received at the Old Town Hall in Bonn on 12 September 1949.
Erna Wagner-Hehmke/Hehmke-Winterer, Düsseldorf.

Soon after being elected the first Federal President of Germany, Theodor Heuss – who was one of the founders of the Federal Republic of Germany – endeavoured to forge close ties with the common people. In so doing, he inaugurated a long line of luminaries whom, from 1949 onward, the citizens of Bonn cheered on in front of Bonn’s town hall. The building, which dates back to the 18th century and features an opulent facade, was almost completely destroyed in a British bomb raid on 18 October 1944. Reconstruction of the edifice was not completed until 1950. 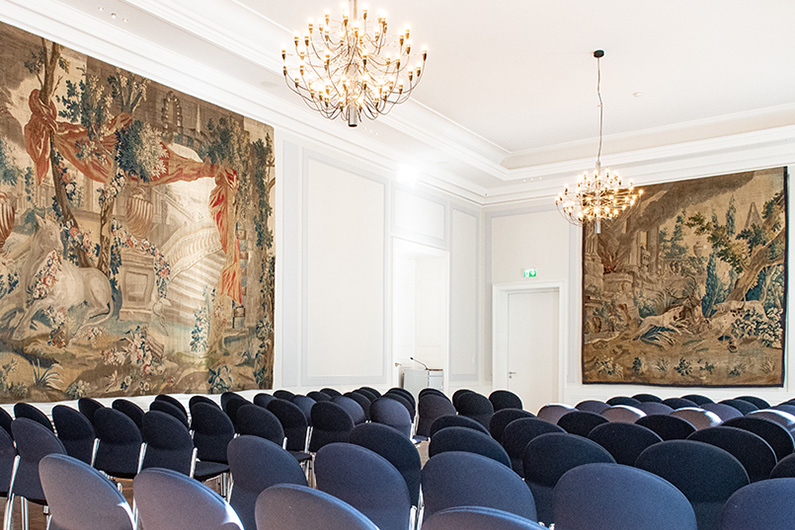 In front of this building, countless state visits have unfolded that many have found impressive, including those who sign the city of Bonn’s Golden Book. The cheering receptions accorded the honoured guests at such events contributed to emotionally charged acts of reconciliation, such as the one that occurred during the state visit of French President Charles de Gaulle on 5 September 1962: “Long live Germany! Long live France! Long live German-French friendship!”

Another example is what is reported to have happened when Mikhail Gorbachev mounted the Bonn Town Hall steps on 13 June 1989. According to historian Rafael Biermann, the Soviet leader was as deeply moved by this moment as he was by the conversation he had had the night before with Helmut Kohl on a wall on the Rhine. 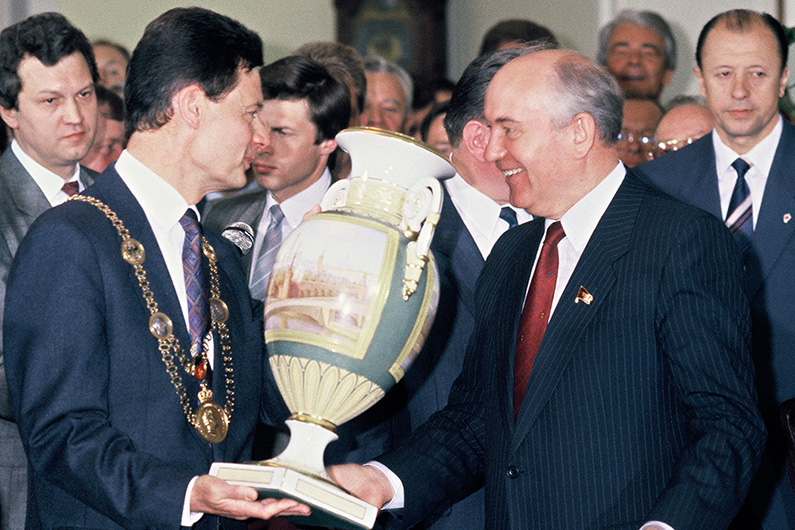 On the other hand, the citizens of Bonn loved the theatricality of diplomats’ limousines and their motorcycle escorts racing into the city from Cologne-Bonn Airport. On 23 June 1963, President John F. Kennedy stood before Bonn’s Old Town Hall and referred to Bonn as “the capital of the free world” – a precursor of the legendary statement the US President made a few days later in a divided Berlin: “Ish bin ein Beerliner.” 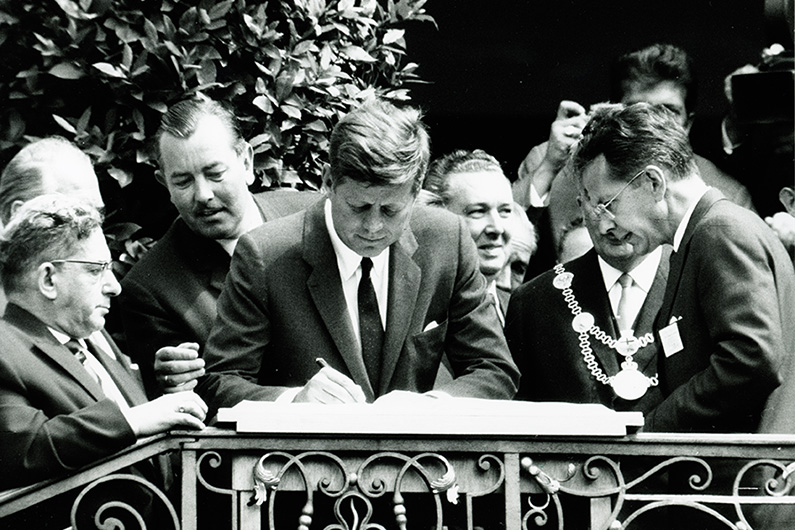 On 19 May 1965 Queen Elizabeth II of England stepped onto the balcony – the third major visit that underscored Germany being welcomed back into the family of nations. 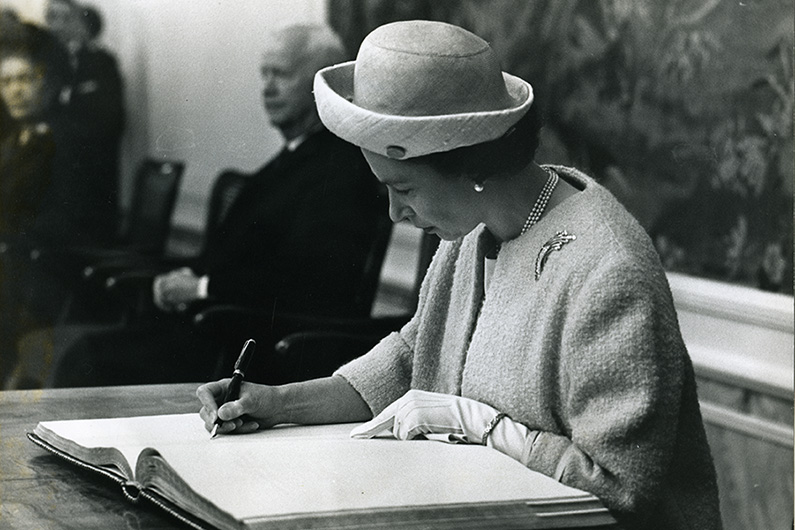 ... that one of the tapestries in the Gobelin-Saal (Gobelin Hall) of Bonn’s city hall made history? From 1948 to 1949, the city of Bonn loaned the Parliamentary Council this tapestry, thus endowing the straight-laced Pädagogische Akademie with a touch of the historical: the tapestry depicts the Abduction of Europa.