It is through the Bundesrat that Germany’s federal states exercise the lion’s share of their legislative powers. The Bundesrat met in Bonn from 1949 to 2000, at the former Pedagogical Academy, where the Parliamentary Council had been hammering out the German Constitution, or Basic Law, since September of 1948.

In the former Bundesrat the foundation Haus der Geschichte presents the exhibition "The German Basic Law".

In July 1948 the Minister Presidents of the 11 West German federal states were summoned to Frankfurt, where they were ordered by the military governors of the American, British and French Occupied Zones to convene a constitutional convention on the following 1 September, for the purpose of forming a new national state. 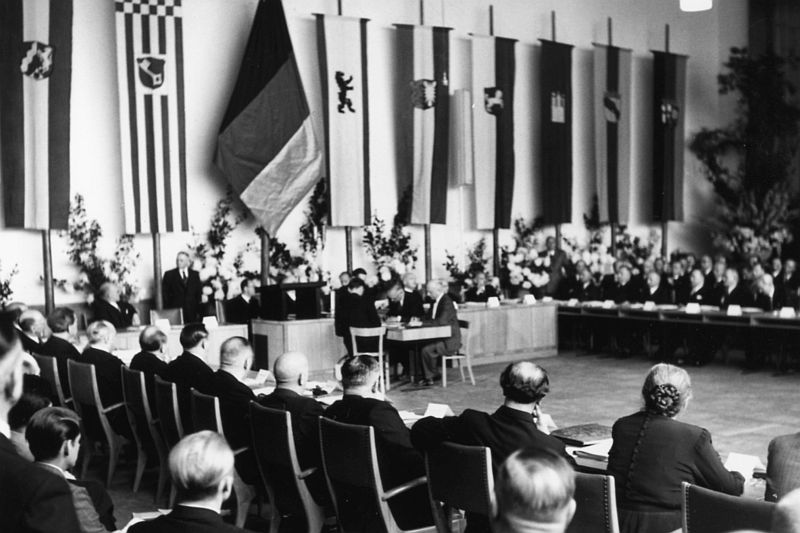 The founding meeting of the Bundesrat was held on 7 September 1949.
Erna Wagner-Hehmke/Hehmke-Winterer, Düsseldorf

The federal-state delegates went about their appointed task, but there was no euphoria: The world was at the beginning of the Cold War. In March 1948 the Soviet military governor Vasily Sokolowski resigned from the Allied Control Council, signalling the definitive failure of the German talks between the three Western occupying powers and the fourth in the East, the Soviet Union. In June of that year, Soviet troops began a blockade of West Berlin. The Minister Presidents feared that the establishment of a “West Germany” might end all hopes of founding a unified German state. And thus during their sessions, they emphasised the fact that the founding of “West Germany” would be an interim arrangement only.

This concern was uppermost in the minds of the members of the Parliamentary Council while they were drawing up a “Basic Law” for the new nation – and in so doing deliberately made no claim to be a constitutional convention. The Basic Law promulgated a “new national order for a transitional period.” It also marks the beginning of the history of the Federal Republic of Germany as a democratic and federal constitutional government and welfare state. 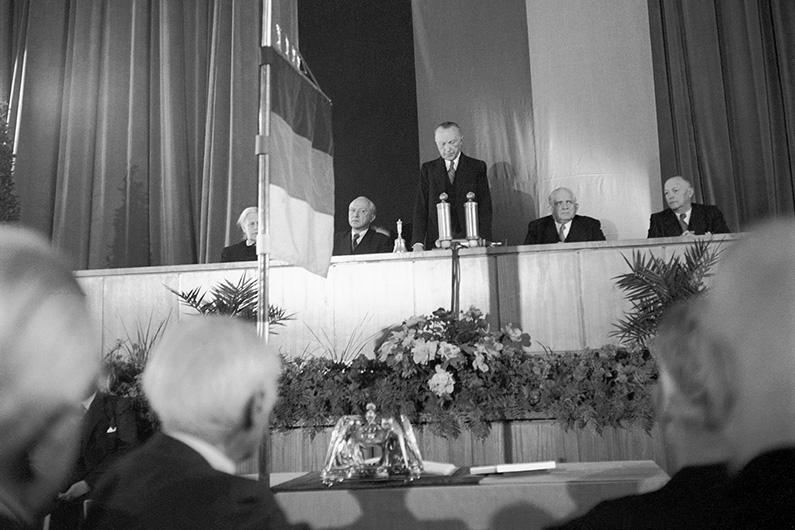 At the plenary session held in Bonn on 8 May 1949, 53 of the 65 Parliamentary Council members (four of whom were women) voted to adopt the Basic Law. The voting ended shortly before midnight, so that the official date of passage could be the fourth anniversary of the end of World War II. The signing ceremony for the Basic Law was held the following 23 May, with Konrad Adenauer and his deputies, the members of Parliament, and the Federal States Minister Presidents and Presidents of the Federal States Parliaments. Time Magazine heralded the event as a “milestone at Bonn” – in other words “a milestone on Germany’s winding road to democracy”.

It was thanks to the efforts of the head of the Dusseldorf State Chancellery, Hermann Wandersleb, that the Parliamentary Council ended up holding its sessions in Bonn. As early as 1947, he established a course on governance at a teachers training college known as the Pedagogical Academy. Thus, in the summer of 1948, Mr. Wandersleb suggested that the Parliamentary Council meet at the Akademie. In a telephone vote of the Minister Presidents on 13 August 1948, eight out of eleven voted in favour of Bonn, with Karlsruhe, Frankfurt and Celle receiving no votes at all. 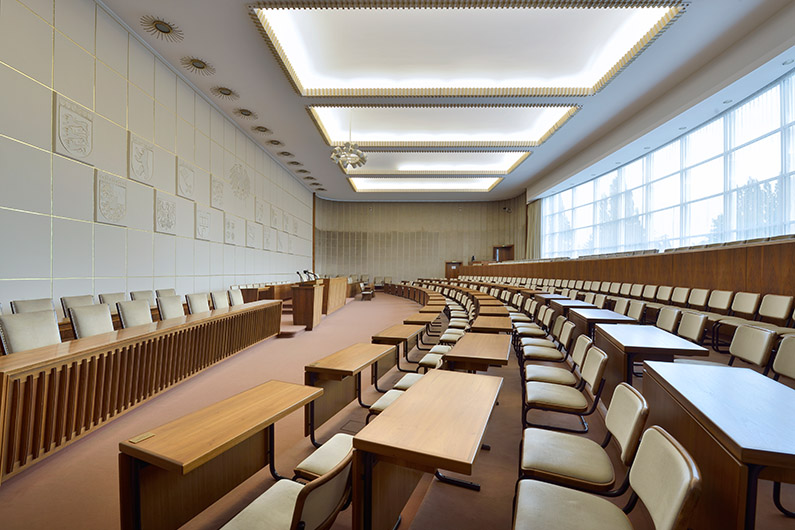 In its capacity as one of Germany’s five constitutional entities, the Parliamentary Council is a lynchpin of German democracy. Here, representatives of the various Federal States adopt legislation, 2018.
Stiftung Haus der Geschichte/Axel Thünker

It wasn’t long before Mr. Wandersleb was nicknamed Bonnifacius. The university city on the Rhine even prevailed against a competing applicant when, in 1949, the Parliamentary Council voted on the location of an interim German capital. When, on 10 May of that year, the Council voted on the question, 29 members voted for Frankfurt, but Bonn received 33 votes. And on 3 November 1949, when the Bundestag (Lower House of Parliament) voted on the question again, a majority of the members of Parliament (200 out of 376) voted in favour of remaining on the Rhine for the time being.

The Pedagogical Academy (1930–1933), a clean-lined white Bauhaus building designed by Martin Witte, housed the Bundesrat for decades to come. The Bundesrat enables the federal-state governments to have a say in federal legislative and administrative policies. The inaugural session on 7 September 1949 began with this quote from the German poet and philosopher Friedrich Schiller: “The establishment and structure of true political freedom is the most perfect work of art.” The session lasted a mere 41 minutes, including an orchestral performance. 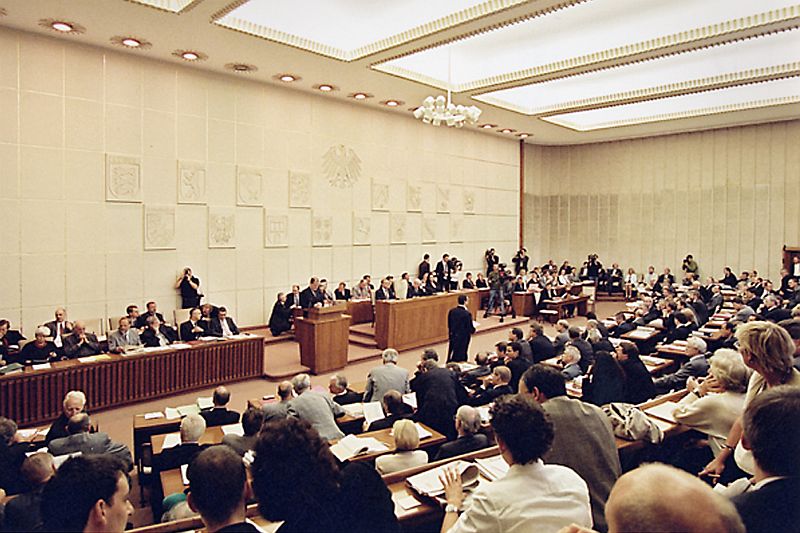 The final Bonn session of the Parliamentary Council prior to the move to Berlin was held on 14 July 2000.
Bundesregierung

The Bundesrat was evidently pleased with the venue. In the wake of the Bundestag’s June 1991 decision to relocate the capital of a newly reunited Germany to Berlin, the Bundesrat voted to remain in Bonn for the time being. Its members now had 16 coats of arms on the wall behind the rostrum, thanks to Germany’s five new federal states.

But in 1996, the federal-state delegates did in fact decide to relocate to Berlin. The last session of the Bundesrat was held on 14 July 2000. This historic site now houses the Haus der Geschichte der Bundesrepublik (Museum of the History of the Federal Republic of Germany), which has a permanent exhibition on "The German Basic Law".

... that at one time the five Berlin MPs were only allowed to participate in Parliamentary Council deliberations in an advisory capacity? This was due to the special status of Berlin. But on 23 May 1949, Berlin also became a signatory to the Federal Republic of Germany’s Basic Law.