The Christian Democratic Union (CDU) was headquartered from 1971 to 2000 on the street known today as Friedrich-Ebert-Allee. The building was demolished in 2003 to make way for the new Deutsche Telekom headquarters.

Losing the chancellorship in 1969 was a wakeup call for the CDU. The party realised that if it were ever to regain its former robustness, its operations would have to be modernised, efficient, and managed by professionals – in short, as party secretary general Kurt Biedenkopf put it in 1973, a “corporate CDU” was needed. The ensuing modernisation efforts were embodied by the party’s newly constructed Konrad-Adenauer-Haus headquarters in the southern part of the government district, which the party moved into in December 1971. The building’s red illuminated rooftop letters became a favourite Bonn calling card for TV coverage.

However, the first steps toward constructing the new headquarters were taken much earlier: the party had purchased the site from the city back in 1962. Max Meid and Helmut Romeick, the architects hired in 1963 to design the building, had already created a number of highly regarded apartment buildings and office buildings, such as the Chase Manhattan Bank building in Frankfurt.

But the project was slow to get off the ground, on account of (among other factors) residents’ opposition to construction of a high-rise. The CDU didn’t apply for a building permit until December of 1965. Construction got underway in 1970, the party moved into the building in 1971, and it wasn’t officially dedicated until January of 1973 – an occasion marked by the celebratory display of a bust of Konrad Adenauer. 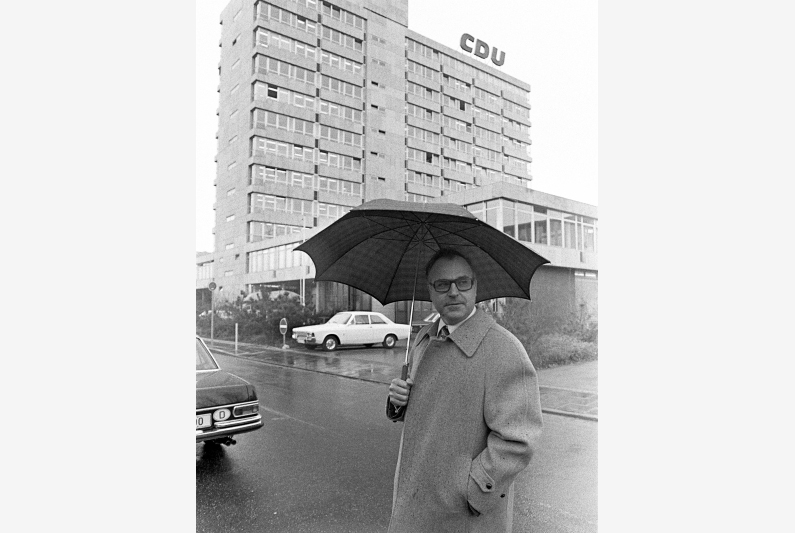 Helmut Kohl was CDU chairman when this photograph of him was taken in front of his party’s Bonn headquarters, 1976.
Bundesregierung/Richard Schulze-Vorberg

Fortunately, the ten-storey edifice, which sported a light grey limestone façade, provided ample space for all of the party staff members who up until then had been working at Nassestraße 2 and more than a dozen other locations. The tenth floor was given over to the secretary general’s offices. On the ninth floor, the new CDU chairman Helmut Kohl, who had succeeded Rainer Barzel in 1973, was replaced by Wolfgang Schäuble in 1998.

The building also featured the Union-Säle (Christian Democratic “Union Rooms”) which were used not only for press conferences, but also for dance performances and carnival festivities.

The party’s modernisation efforts soon bore fruit of the numerical variety, with party membership rising from 300,000 in 1969 to 420,000 in 1972, when the CDU again became the party with the largest number of seats in the Bundestag – and to around 735,000 in the year of the election triumph of 1983.

The infusion of new members brought fresh ideas to the CDU. The new political programme adopted by the party in October 1978 at the 26th annual Federal Party Conference called for the CDU to renew its commitment to the principles of “freedom, solidarity and justice”. As early as 1968, the party had tried for a reorientation with its Berlin Programme, and in the 1970s eased its opposition to Willy Brandt’s Ostpolitik.

But it was not until 1978 that, as the result of an open dialogue with members of the public, social groups and organisations, and party members, the Ludwigshafen Programme of 1978 was promulgated as a modern alternative to the social democratic model, one informed by Christian values and the concept of stable and well defined social structures in the realms of the family, state and church. 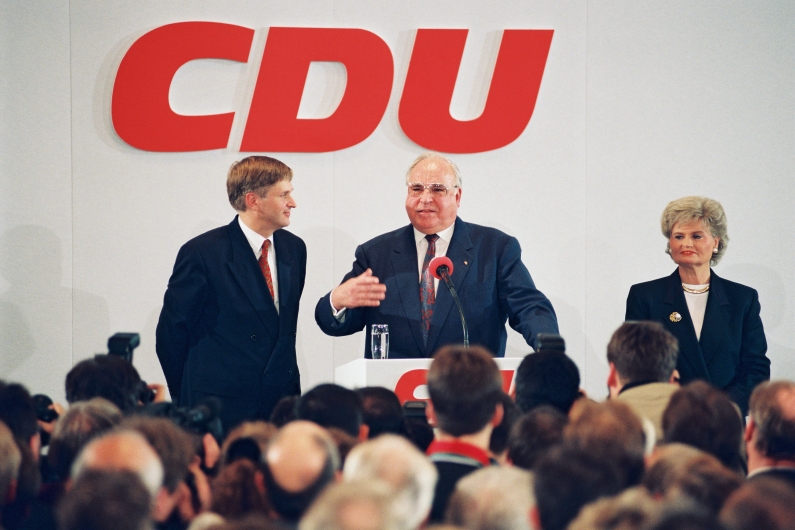 Upon being re-elected Chancellor on 16 October 1994, Helmut Kohl spoke at the victory party at Konrad-Adenauer-Haus.
Bundesregierung

The party stuck with the core components of the Programme even after the sea change of 1998, when Germans voted the CDU out of office.

In the summer of 2000, the CDU vacated the Konrad-Adenauer-Haus in order to relocate to Berlin. On 14 December 2003, the building was razed when 53 kilograms of explosives were detonated inside the structure. Konrad-Adenauer-Haus has since been replaced by Thomas van den Valentyn’s elegant Deutsche Telecom headquarters.