In 1954, the newly created High Authority of the European Coal and Steel Community moved into Schulze-Delitzsch-Haus – thus making this agency the first representation office of a European institution.

Since the spring of 1949, an agency known as the International Authority for the Ruhr began overseeing coal production in Germany’s Ruhr region. Its mission was to keep an economically resurgent Germany in check. However, shortly after West Germany joined the agency, it turned out that its days were numbered. This was due to the fact that in May of 1950, French Foreign Minister Robert Schuman had proposed that “all Franco-German coal and steel production be placed under the control of a common High Authority, an organisation that other European countries would also be free to join.” 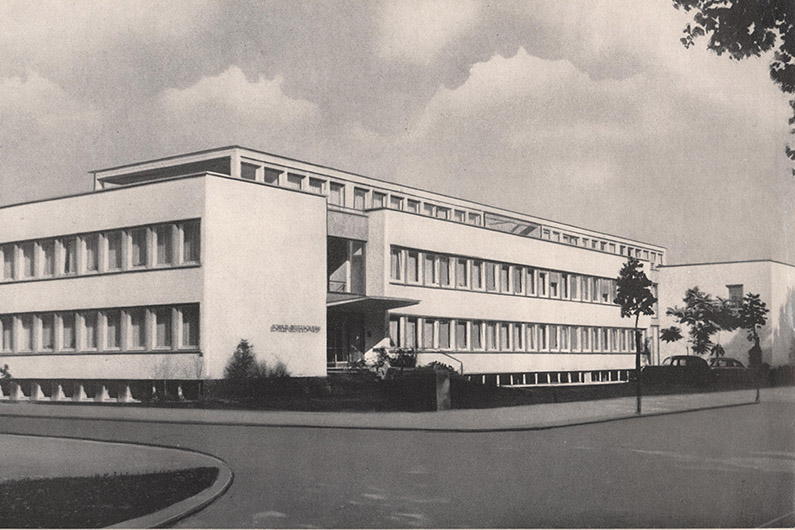 In the mid-1950, the staff of the press liaison office of the High Authority of the European Coal and Steel Community kept the member countries informed about events in Bonn.
Bundesverband der Deutschen Volksbanken und Raiffeisenbanken e.V. - BVR

Also headquartered in the building was the "Deutsche Genossenschaftsverband", a precursor of "Bundesverband der Deutschen Volksbanken und Raiffeisenbanken" (National Association of Branches of the Volksbanken und Raiffeisenbanken – still headquartered in the building to this day) and "Zentralverband des genossenschaftlichen Groß- und Außenhandels" (Association of Wholesale and Export Co-ops). The building, which was designed by architect Wilhelm Denninger of Bonn, is named after the founder of the German co-op movement. The "Wirtschaftsprüfungsgesellschaft gewerblicher Genossenschaften", or Federation of Co-op Auditors, also had its offices here.

In 1958, the press liaison office of the High Authority of the European Coal and Steel Community relocated to a building on Zitelmannstraße that also housed the offices of Euratom and the European Economic Community. Ever since the Government has moved to Berlin, the European Commission has maintained a regional representation office on Bertha-von-Suttner-Platz in Bonn.