In Rhöndorf, where Konrad Adenauer resided from 1937 until his death in 1967, the Bundeskanzler-Adenauer-Haus foundation established a memorial to the life and work of this eminent political figure. In August 1949 the Rhöndorfer Konferenz, which paved the way for Adenauer’s election as Chancellor of Germany, was held there.

A visit to the house is possible as part of a guided tour.
To the foundation (German)

On 21 August 1949, more than twenty leading figures from the Christian Democratic Union of Germany (CDU) and Christian Social Union in Bavaria (CSU) parties gathered in a picturesque detached house for an informal meeting, not far from the ruins of Drachenfels Castle. The meeting was occasioned by the previous week’s results of Germany’s first Bundestag election. The CDU and CSU had the choice of forming a government, either in the guise of a “grand coalition” with the Social Democratic Party (SPD), or with the liberal Free Democratic Party (FDP) party, which would have resulted in a minority government – the approach proposed by the meeting’s host, Konrad Adenauer. Ultimately, a government majority was obtained by including the conservative right-wing Deutsche Partei in the coalition. Through this event, Adenauer laid robust foundations for realisation of his plans for the future.

“[Adenauer] himself jumped into the discussion time after time,” wrote his biographer Hans-Peter Schwarz, “with arguments that reflected the consummate skills of this former Cologne lawyer – arguments that flowed onto the attendees like a downpour that gently and relentlessly discredits all opposing arguments and melts resistance.” Adenauer had this to say about the relationship between the positions of Chancellor and Federal President: “The Chancellor is the key figure. Let someone else become President, I aspire to the office of Chancellor. I’m 73 – but I want to be Chancellor nevertheless (...).” Adenauer proposed FDP Party member Theodor Heuss for the office of Federal President.

Three weeks later, on 15 September 1949, the Bundestag elected Konrad Adenauer to the office of Chancellor, by a majority of just one vote. His cabinet consisted of members of the CDU, CSU, FDP and Deutsche Partei – and Theodor Heuss became Federal President. 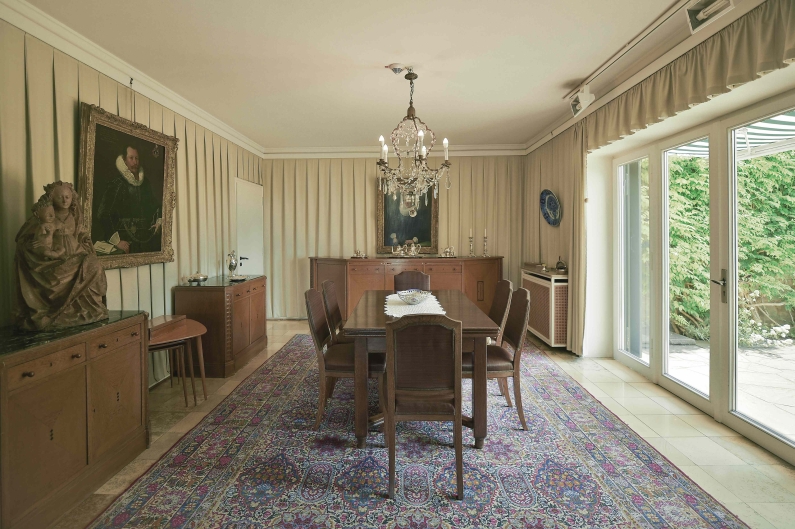 The "Rhöndorfer Konferenz" took place in 1949 in the dining room and living room of the Adenauer family. The furnishings of the house are largely preserved.
Stiftung Bundeskanzler-Adenauer-Haus/Roland Breitschuh 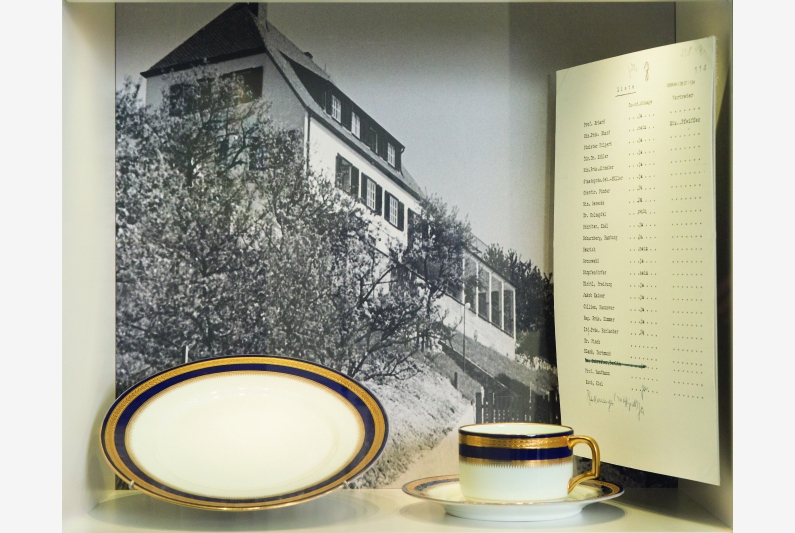 During the talks, the participants of the "Rhöndorfer Konferenz" used this tableware, which is exhibited in the chancellor's former home today.
Stiftung Bundeskanzler-Adenauer-Haus/Roland Breitschuh

This was Adenauer’s second career, having held the position of Lord Mayor of Cologne from 1917 to 1933, before his removal from office by the Nazi government. Adenauer took refuge for nearly a year at Maria Laach Abbey, before moving to Potsdam, where he was briefly jailed.

In the spring of 1935, Adenauer and his family moved into a rented house on Löwenburger Straße in Rhöndorf, on the right bank of the Rhine. However, that summer he was forced to again leave his wife and children behind after being expelled from the governmental district of Cologne. He took refuge once again at Maria Laach Abbey, and at a priest’s holiday home in Unkel. Adenauer returned to Rhöndorf, and his family, in April of 1936. Shortly before Christmas day 1937, he purchased a newly built house on what was then Zenningsweg 8. He lived there during his tenure as Chancellor, and until his death in 1967. 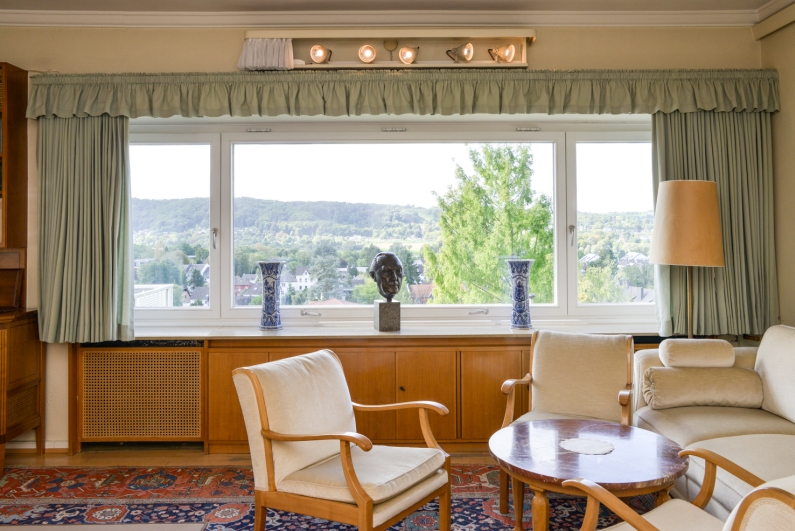 The living room with panorama window to the Rhine valley was the "stage" of the Rhöndorf conference 1949.
Stiftung Bundeskanzler-Adenauer-Haus/Roland Breitschuh

But prior to that, unwanted drama entered Adenauer’s life when, in August of 1944, the Nazis took him into custody. He escaped and hid for a time in Westerwald forest. He was captured again and incarcerated in Brauweiler prison until November of that same year.

Having returned to Rhöndorf, in March 1945 he wrote this about the arrival of American troops: “A total of 12 American grenades were fired into my front garden, three of which hit the front of my house, causing considerable damage. The back of the house was hit by German artillery shelling from the right bank of the Rhine.”

Adenauer and his family, along with three escaped French prisoners of war, took shelter for days on end in the cellar behind the house. A short time later, American soldiers drove Adenauer via Bonn, the birthplace of his father, to Cologne, which had been devastated by Allied bombing. He became Lord Mayor of Cologne once again, but was removed from office only a few month later by the new British authorities.
By contrast, Adenauer’s term in office as Chancellor lasted all the longer – from 1949 to 1963.

Corinna Franz, director of the Bundeskanzler-Konrad-Adenauer-Haus memorial, said the following about the Rhöndorf house, where in 1967 Adenauer passed away at the age of 91: “Policy was devised here, and executed in Bonn.”

... that Konrad Adenauer, “the elder statesman from Rhöndorf,” was at one time the youngest Lord Mayor of a major German city? The 1917 document officially naming Adenauer to this post is one of the items on display at the Bundeskanzler-Adenauer-Haus memorial in Rhöndorf.