The exhibition centres around the life and achievements of Willy Brandt. The Chancellor lived in Unkel from 1979 until 1992.

In March 2011, one particular office in the town of Unkel was the focus of particular attention. The office, which belonged to the town’s most renowned citizen, was originally installed in his home at Auf dem Rheinbüchel 60, and subsequently in the Unkel town hall. And now it is here: Willy Brandt’s desk and bookshelves are among the biggest draws at the exhibition. The exhibition explores the life of this Social Democrat politician, who during the final years of his life resided in Unkel.

Few Germans are aware of the fact that Brandt resided in this small town on the banks of the Rhine for 13 years. Brandt is associated with, on one hand, Lübeck, where he was born in 1913 as Herbert Frahm, and on the other with his exile in Norway and Sweden, which he left at the end of World War II. And last but not least, Brandt is associated with Berlin, where he served as Governing Mayor from 1957 to 1966.

And needless to say, he is also associated with Bonn, where he was an SPD member of Germany’s first Bundestag (Lower House of Parliament). He rented a room on Hausdorffstraße while the Bundestag was in session. During his tenure as Foreign Minister (1966–1969), he lived in an official residence in the Bonn neighborhood of Venusberg, and even continued living there, on Kiefernweg, while he was Chancellor (1969–1974). “On Sundays Scheel and Ahlers would often come over to discuss something or other with Willy – and so it was fitting that the wives should get together as well,” Brandt’s Norwegian-born wife Rut wrote in her memoirs regarding Brandt’s relationships with the Foreign Minister and government spokesman. When Brandt resigned, he moved to a nearby duplex on Paulshof with his family. 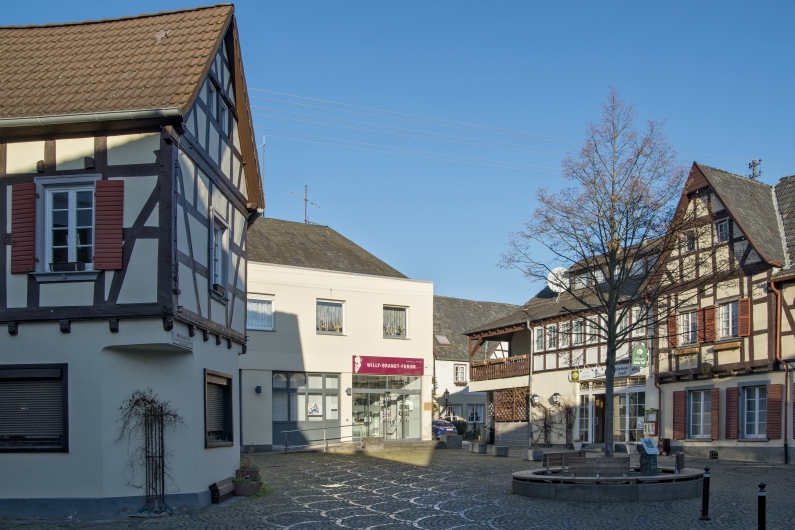 It was not until 1979 that Brandt discovered Unkel. He had a new partner and spent the rest of his life with her in Unkel – at first in a flat on Eschenbrenderstraße, and then until his death in 1992, in his own home. The couple also bought a vacation home in the southern French city of Gagnières, where they often went.

Though officially retired, Brandt did not act like a pensioner. He was a member of the European Parliament until 1983, SPD party leader until 1987, and president of Socialist International until 1992. His presence was also felt at events relating to public policy: at the Federal Press Conference, where in 1983 he presented the so called Brandt Report on international development issues; in East Berlin during talks with Erich Honecker; and at the Kremlin during talks with Mikhail Gorbachev.
In 1990 during the second Gulf War and shortly before Brandt turned 77, he spent three days in Baghdad trying to persuade Saddam Hussein to release nearly 200 foreign hostages. On 20 June 1991, when the Bundestag voted on whether to transfer the German capital from Bonn to Berlin, Brandt, who was a Bundestag member at the time, spoke in favour of the move. Brandt, who was awarded the 1971 Nobel Peace Price for his policy of East-West détente, also found time to write his memoirs. 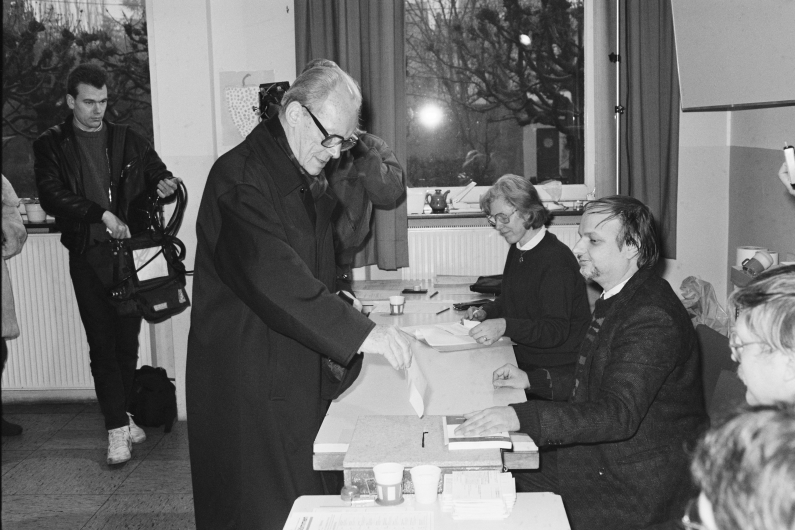 Former German Chancellor Willy Brandt votes in the first Bundestag election after the German Reunificiation on 2 December 1990 at a polling station in Unkel.
Bundesregierung/Wolfgang Lemmerz

There was never a dull moment in the life of Willy Brandt, and wherever he went, he was in the spotlight. He and his new partner, Brigitte Seebacher, only had time for themselves in Unkel (pop. 4,000), a small town on the right bank of the Rhine. During his final illness, many of his friends and associates came to Unkel to exchange a few final words with him. Mikhail Gorbachev, who showed up one day unannounced, was mistaken for a journalist in disguise and was sent packing.

Even former Chancellor Helmut Kohl paid Brandt a visit in his home on the Rhine during this final chapter of his life. The two men spoke about death, Brandt’s life and his wish for a “Chancellor’s funeral.” A wish that, following his passing on 8 October 1992, was granted – in Berlin, where his career began.

… that Konrad Adenauer also lived in Unkel for a time? After being expelled by the Nazis from the governmental district of Cologne, Adenauer lived from October 1935 to April 1936 in a vacation home for Catholic priests on Kirchstraße in Unkel, while his family stayed behind in Rhöndorf.