The construction of the building is completed in 1925 as a town house, 2006.
Johannes Schott, Altes-stadthaus-bonn, CC BY-SA 2.0 DE

Seat of the Federal Ministry of All-German Affairs
1949–1957

The Federal Ministry of All-German Affairs symbolises West Germany’s opposition to the division of Germany into East and West.

The post-World War II period was not the first time that Germany had been occupied by foreign forces. In the wake of Germany’s defeat in World War I, foreign troops occupied the Rhineland, where for seven years they oversaw the demilitarised zone that had been established there. Upon being planned in 1922, the building complex on Bottlerplatz (which today houses the municipal library, among other facilities, known as the Main Library in "Haus der Bildung") was slated to serve as an administrative building for French occupying forces; but upon completion in 1925, it became the Bonn city administration office building. 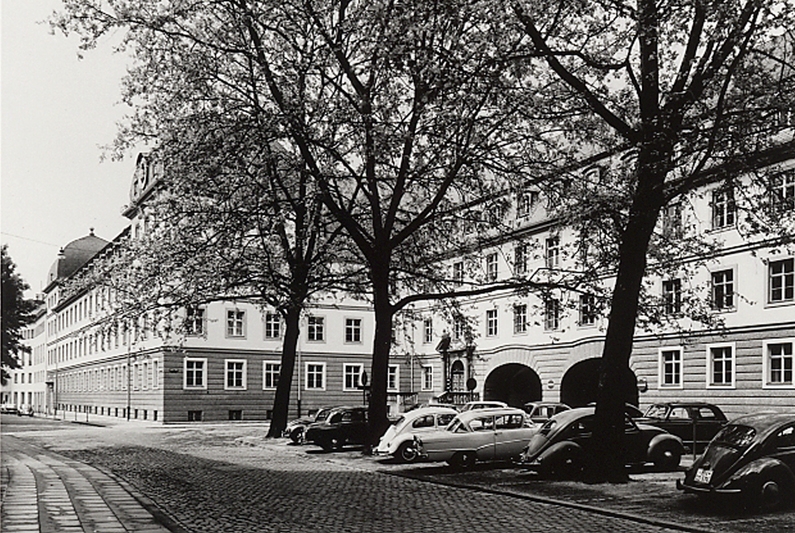 From 1949 to 1957 parts of the building housed the relatively small Federal Ministry of All-German Affairs. During Adenauer’s “Western Orientation” period, the building was freighted with symbolism, for its very existence evoked the fact that West Germany found the division of Germany into East and West completely unacceptable.

Ministry staff were tasked with evaluating material concerning events in communist East Germany and with drawing attention to the propaganda of its repressive government. But the Ministry also endeavoured to “make East Germans aware of the emergence and nature of West Germany, and that it was bound to become the main axis of a future reunified Germany.” Thus the Ministry was, in the words of historian Stefan Creuzberger, “not only a product, but also an instrument of the Cold War.” The Ministry even went so far as to “frequently resort to proactive defensive measures”, i.e. intelligence gathering and the like for the CIA since 1952/53. The Ministry was headed until 1957 by Jakob Kaiser, who was active in the resistance movement against Hitler and in 1945 was among the founders of the East German arm of the CDU.

In 1957 the Ministry moved to a building at the corner of Hofgarten and Lennéstraße. When it moved into the new Allianz buildings at Tulpenfeld in the late sixties, its new name "Ministerium für innerdeutsche Beziehungen" (Ministry of Intra-German Relations) took account of the changed tone in relations between East and West Germany.