The Tulpenfeld office complex consists of an 18 storey high rise, a hotel, three free-standing atrium buildings and two other office buildings, 2018.
Stiftung Haus der Geschichte/Benjamin Westhoff
Since the early 1990s, the Bundeskunsthalle and Kunstmuseum Bonn have been located across the way from the Tulpenfeld office complex, 1999.
Rheinisches Amt für Denkmalpflege

The Tulpenfeld office complex has housed federal ministry and MP offices, and has been the venue for press conferences at the federal level since 1967. Among the government-agency offices located there today are those of the Federal Network Agency.

During the post-war period, Germany’s interim capital city was the scene of, as the newsmagazine Der Spiegel put it, “a ‘Thirty Years’ War’ over Bonn’s urban development and government buildings”. The cause: parliament and the government needed more space, but since 1956 the federal government had been subject to a building freeze, which was gradually lifted, but not until the 1960s. During this period, two new buildings sprung up on the main artery between Bonn and Bad Godesberg: the white Bonn-Center (1968) which was meant to be the counterpart to West Berlin’s Europa-Center; and the Tulpenfeld office complex, which was financed by the Allianz insurance company. 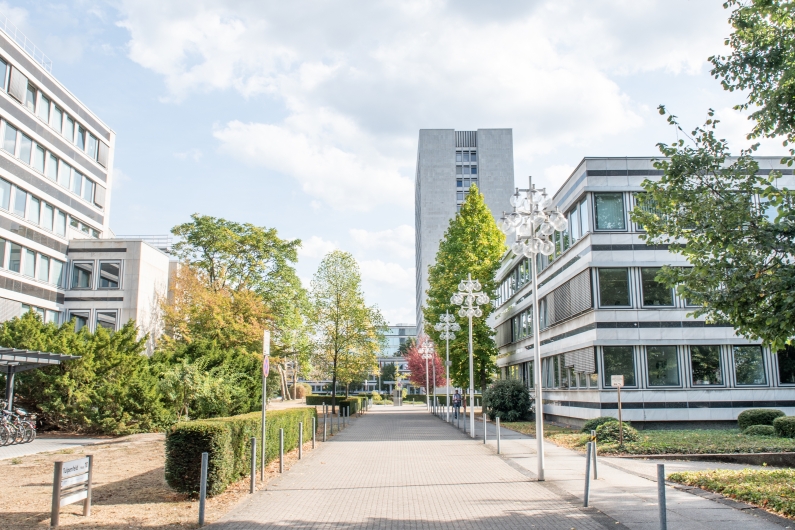 The Tulpenfeld office complex can be reached via a street leading from Heussallee, and via another that begins at the corner of Winston-Churchill-Straße and Heinrich-Brüning-Straße, 2018.
Stiftung Haus der Geschichte/Benjamin Westhoff

Both structures endowed Bonn with a healthy touch of modernity. Plus they provided the federal government with badly needed office space – which was available for rent, as was customary in Bonn, with its widely scattered government agencies and offices. This held true in particular for the Allianz office complex (1964-1967), which is located on the site of a former plant nursery.

During the Nazi period, architect Hanns Dustmann (1902-1972) held the title of Reich Architect of the Hitler Youth, and was also a member of the paramilitary and security organization of the Nazi Party, the Schutzstaffel (SS). Now this former member of Speer’s Task Force for the Reconstruction of Cities Destroyed by Bombing was being headhunted by banks and insurance companies. 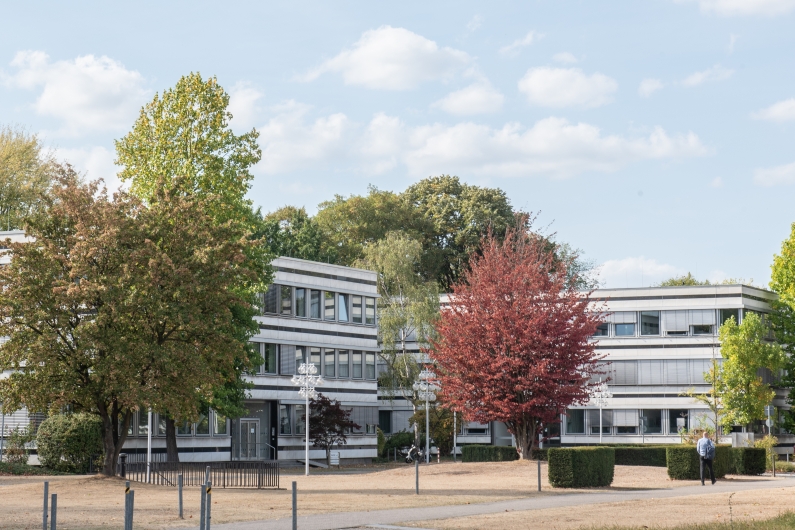 Key facts and figures concerning his design: 41,450 square meters of floor space; an 18-storey high-rise; a hotel building; three free-standing atrium buildings; and three additional office buildings, with ample space for a fountain in between. Also, these plans, last but not least helped to gradually accustom the republic to the idea of a new government district, which also paved the way for construction of the “Lange Eugen” office tower.

The Tulpenfeld office complex was a welcome addition to the local office-space market not only for government agencies such as the Federal Minister of All-German Affairs (later renamed Ministry of Intra-German Affairs), but also for the MPs and journalists who were housed there. One of the atrium buildings on the north side of the complex housed the Swedish embassy, whose ambassador, Sven Backlund, recalling his time in Bonn, said, “Actually the German capital was one big discussion group.”

And last but not least, in 1969, at the Tulpenfeld complex, a hotel opened its doors – which in 1971 hosted the first East Berlin delegation for extensive negotiations with the federal government. The luxury suites on the top floor were partly converted into meeting rooms, a dining room and a secretarial-pool room, with direct phone and telex connections to East Berlin. The policy of détente promulgated by Willy Brandt and Egon Bahr began to bear fruit for the relationship between East and West Germany, as dozens of meetings between the two sides in Bonn and Berlin show. 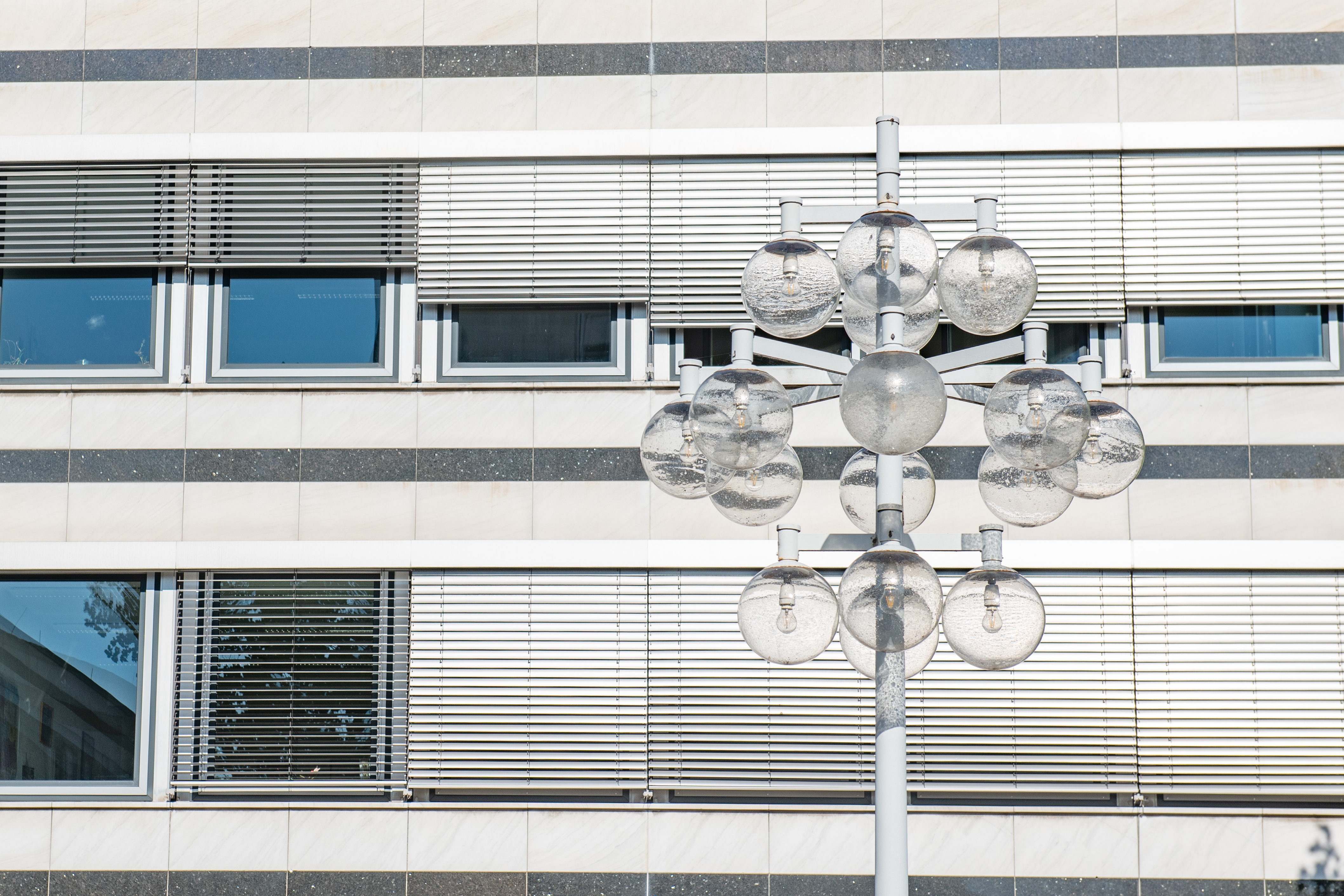 After the 1983 Bundestag (parliament) elections the turbulent Green Party moved into the Allianz buildings. The Bundespressekonferenz (Federal Press Conference) was also headquartered at Tulpenfeld from 1967 to 1999. TV viewers remember the rosewood wall in the background.

Ever since the government moved from Bonn to Berlin, the Federal Network Agency (among other government bodies) has been housed in Tulpenfeld.

...that the Green Party football team still bears the name of the location of the party’s Tulpenfeld headquarters? The team, which was founded in 1983, is called the Grüne Tulpe, or Green Tulip (Tulpenfeld means tulip field in German).