The Federal Republic of Germany’s Foreign Office (1953-1955) was one of the republic’s first government buildings and housed the Ministry until 1999. Now that the German capital has moved to Berlin, the Foreign Ministry uses the building as its secondary official seat. Part of it is also used by the Federal Office of Justice.

Time Magazine named German Chancellor Konrad Adenauer Man of the Year in 1953. The 4 January 1954 cover of the magazine announcing this accolade featured a portrait of Adenauer in front of a broken off black, red and gold tree stump with new leafy green branches growing out of it and the following caption: “In the councils of the great powers, a new member.” 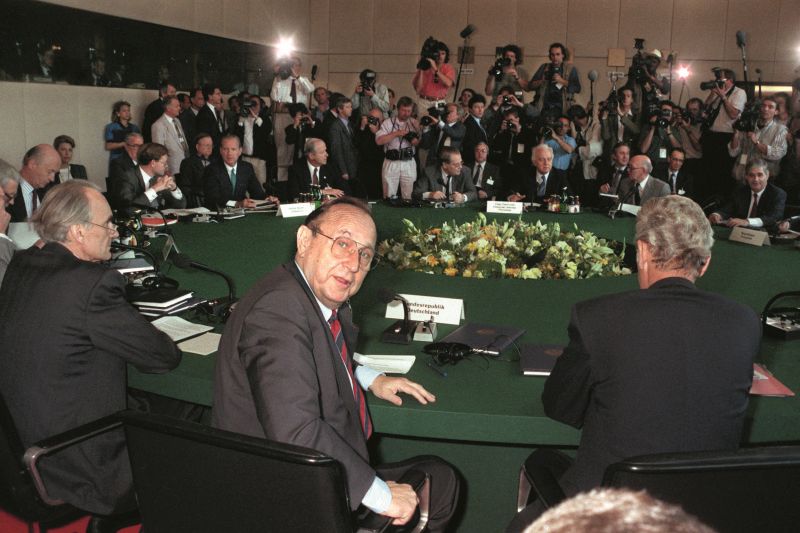 Foreign Minister Hans-Dietrich Genscher (centre) looking into the camera during the first round of the Two Plus Four negotiations in the Foreign Ministry’s Weltsaal hall on 5 May 1990.
dpa - Bildarchiv

For example, when, in the wake of the “minor revision” of the Occupation Statute in March of 1951, West Germany was allowed to begin establishing a Foreign Ministry and diplomatic relations, academic Walter Hallstein was involved in the shaping of German foreign policy in his capacity as the new nation’s first State Secretary – a position he held, in the Foreign Ministry, until 1958. 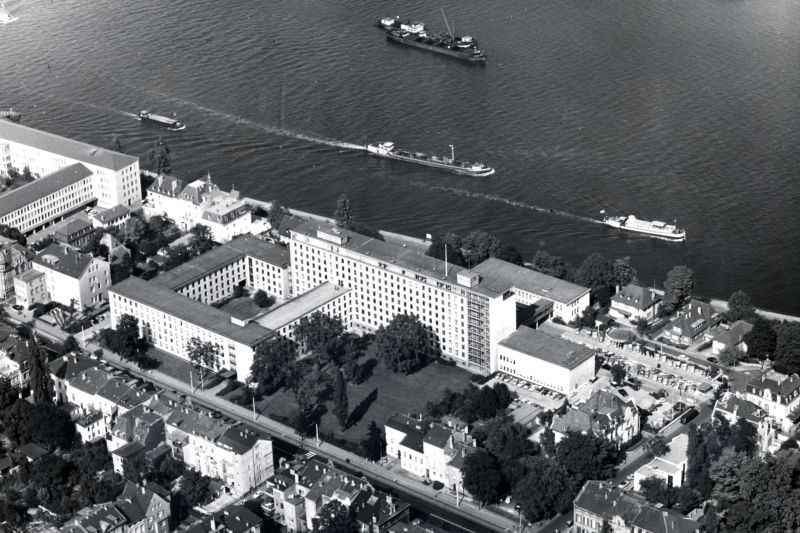 The Bonn Foreign Ministry is located in the northern part of the Gronau district, on the banks of the Rhine.
Stadtarchiv und stadthistorische Bibliothek Bonn

During this period, Hallstein advocated strongly for German participation in the European Coal and Steel Community and the European Economic Community (both forerunners of the European Union) as well as for rapprochement with Israel. From 1955 onwards, a concept that was the brainchild of Political Department head Wilhelm Grewe – but was christened the Hallstein Doctrine by journalists – influenced a whole era of German foreign policy. With the exception of the Soviet Union, which Adenauer visited in September 1955, until the late 1960s West Germany imposed sanctions on every country that recognised the German Democratic Republic, which was founded in 1949 in the Soviet Occupied Zone. West Germany contested the legitimacy of East Germany on the grounds that the Federal Republic of Germany considered itself the sole legitimate successor of the German Reich (1871-1945) and the only nation-state entitled to represent the interests of the German nation and its people.

West Germany’s newly established Foreign Ministry faced formidable challenges, including regaining the trust of the community of nations that Germany had lost during the Nazi period, and proving to the world that the Federal Republic of Germany was the sole legitimate representative of the German nation and its people. But there were practical matters that had to be taken care of first – namely how to go about bringing to an end the practice, rife during the new nation’s infancy, of having government offices operate out of 20 or so buildings in Bonn and Bad Godesberg.

The solution to his problem took the form of a nine-storey building that was as gargantuan as it was austere, with a glass staircase and exactly 1,112 windows. It was located near the Chancellery and was easily accessible to and from Bad Godesberg, where many embassies were located, via a federal highway (the so called Diplomatenrennbahn, “diplomats’ race track”). The official building trade-magazine Die Bauverwaltung even went so far as to prophesise, upon completion of the building in September 1955, that “the usefulness of this office complex will continue to exert a strong pull far exceeding its current purpose.” 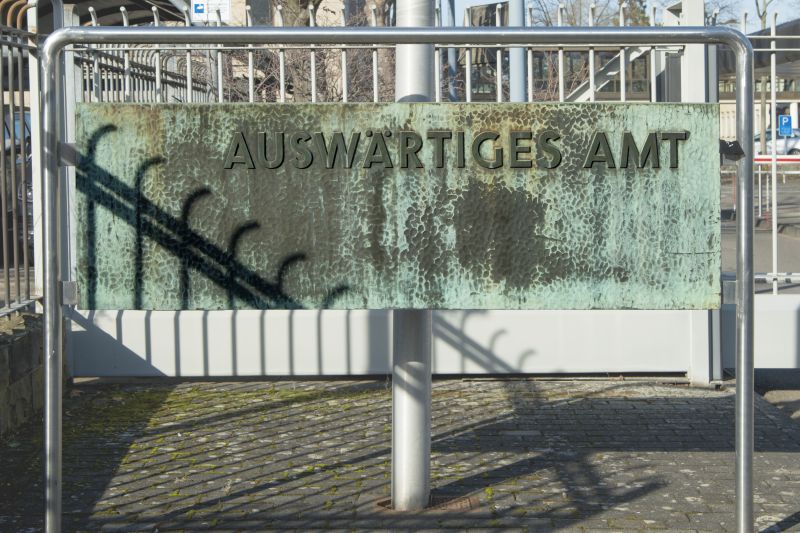 Today, the building, which is located on Bonn’s Adenauerallee, serves as a secondary official seat for the Foreign Ministry, 2005.
Stiftung Haus der Geschichte/Axel Thünker

Personnel recruitment proved to be a delicate balancing act during the early years of German foreign policy. A diplomat named Ulrich Sahm noted in his memoirs that many key diplomatic posts went to former Third Reich officials. “Whether consciously or unthinkingly, [these officials] were either deeply implicated in the horrors perpetrated by the Nazi regime; or their futile efforts to remain morally upstanding human beings left them spent.” As the result of a series of articles that appeared in 1951 and 1952 in the newspaper Frankfurter Rundschau, a special parliamentary committee was formed to look into the issue of former Nazis holding key government positions. But even the new building’s architect Hans Freese was tainted by Nazism, having at one time worked for Hitler’s chief architect Albert Speer, the general building inspector for the Reich’s capital city of Berlin, and was slated to design Speer's private home, among other things.

The policies of integration with the West and reconciliation during the Adenauer years; the new eastern and détente policies of Brandt and Scheel; Hans-Dietrich Genscher's diplomacy on the German question in 1989 and 1990; and European integration in the lead-up to the 1992 signing of the Maastricht Treaty – all these events bore witness to a new and different Germany. In 1990, a round of what were termed the Two Plus Four negotiations was held in the Foreign Ministry’s Weltsaal hall, between Germany and the victors of World War II, on the "external dimensions of the establishment of German unity.” These negotiations resulted in full national sovereignty being conferred on Germany under international law. 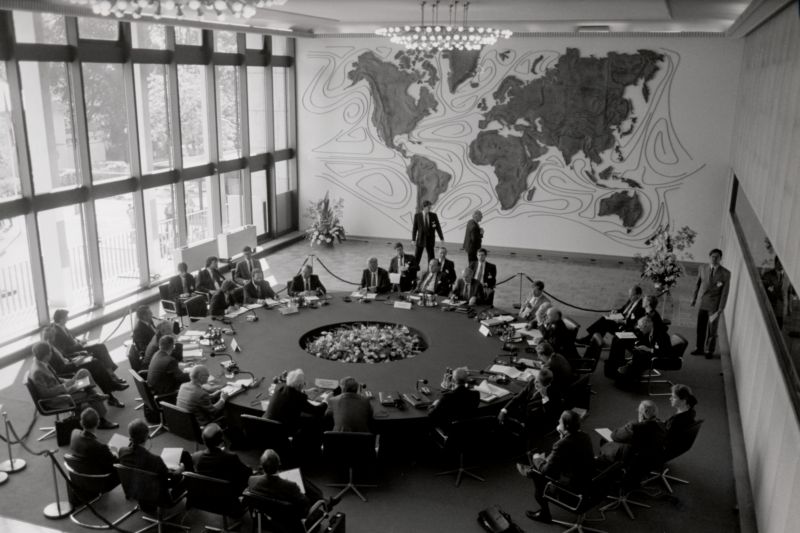 The first negotiating session of the Two Plus Four negotiations took place on 5 May 1990 in Bonn.
Bundesregierung

The building has served as a secondary official seat for the Foreign Ministry since Germany’s capital relocated to Berlin. Part of it has also housed the newly established Federal Office of Justice since 2007.

... that diplomats used a paternoster (an elevator with open compartments that move slowly in a loop up and down ) to get from one floor to another in the building?