From 1976 to 1999 the Federal Chancellery was the official residence of Chancellors Helmut Schmidt, Helmut Kohl and Gerhard Schröder. The building has housed the Federal Ministry of Economic Cooperation and Development since 1999.

Visitors need to register in order to visit the Bundeskanzleramt.
To the Federal Chancellery

In 1969, a full two and a half years after Federal Chancellor Konrad Adenauer passed away and lay in state on the ground floor of his offices in the Palais Schaumburg, the Federal Cabinet finally replaced the creaky old (and narrow) Palais. A new building was constructed on the meadows between Palais Schaumburg and the Bundeshaus. Horst Ehmke, Willy Brandt’s Chancellery Minister, who was known for his architectural acumen, wanted a “modern, functional government centre”.

When the low-rise building designed by the architectural firm of Planungsgruppe Stieldorf was ready for occupancy in the summer of 1976, enthusiasm for the newly built office was anything but unbounded. Brandt’s successor Helmut Schmidt and the building’s first resident, was unsparing in his criticism: “This thing could just as easily house a regional savings bank or savings bank association, or a life insurance company”, he said. 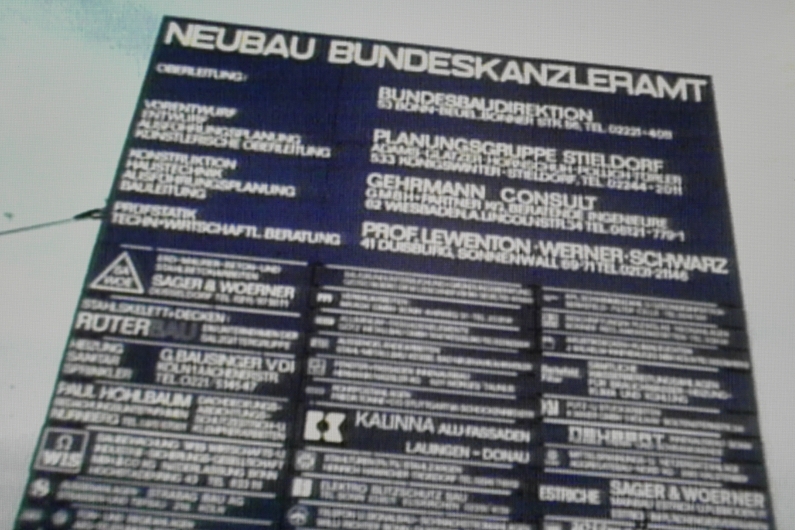 This board informed about the construction work and the clients and companies involved.
Bundesregierung

Though truer words may never have been spoken, the fact remains that, in the words of the architecture critic Heinrich Wefing, “the deliberate repudiation of all grand gestures has always packed a powerful symbolic punch (...). The civil servant in chief of the Federal Republic, the CEO of Deutschland Inc. now resides in an office building that has no pretensions to be anything other than an office building. No marble, no pompous halls, nothing that evokes even a scintilla of a remembrance of the bombast of Hitler’s Reich Chancellery.”

Soon after taking up residence in the new Federal Chancellery (which also contained an atomic fallout shelter), Schmidt found a way to endow the building with “a distinctive, human atmosphere”. He bedecked the interior with works of art by the likes of Karl Schmitt-Rottluff, Erich Heckel and August Macke – one and all deliberately chosen for the contempt they were held in by Nazism.

Schmidt had Henry Moore’s “Large Two Forms” installed at the entrance to the grounds. Schmidt, who saw the work as an “expression of the human spirit”, said at the dedication ceremony, “This building should also represent culturally how we see ourselves as a people and a nation”.

The sculpture was also a handy distraction from the fencing and security measures that had been installed on the grounds to protect against a possible Red Army Faction attack. This terrorist threat was one of the greatest challenges faced by the Schmidt Administration. 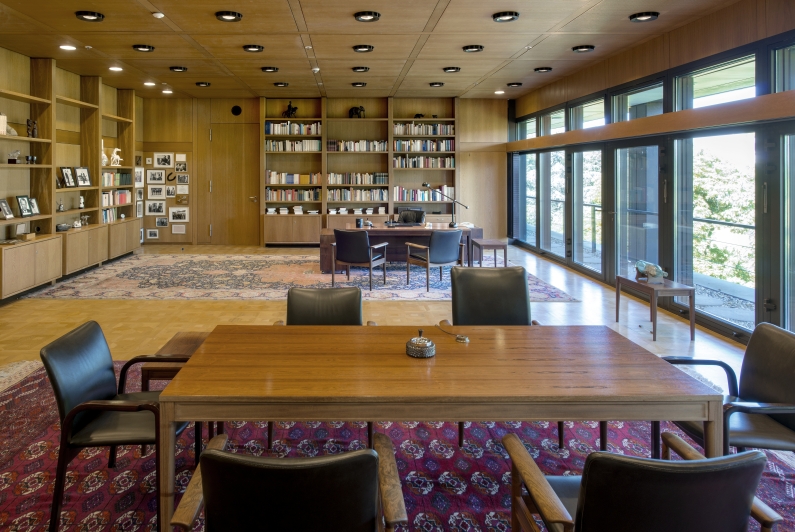 Chancellor Helmut Kohl added his share of amenities as well. This sedate Palatine had an illuminated aquarium installed next to his desk. For the entire 16 years of his occupancy of the Federal Chancellery (1982-1998), and like Helmut Schmidt before him, Chancellor Kohl lived in a house that was built for German heads of government just behind the Chancellery.

Kohl’s successor, Gerhard Schröder, used the Federal Chancellery office for only a brief period of time, however. 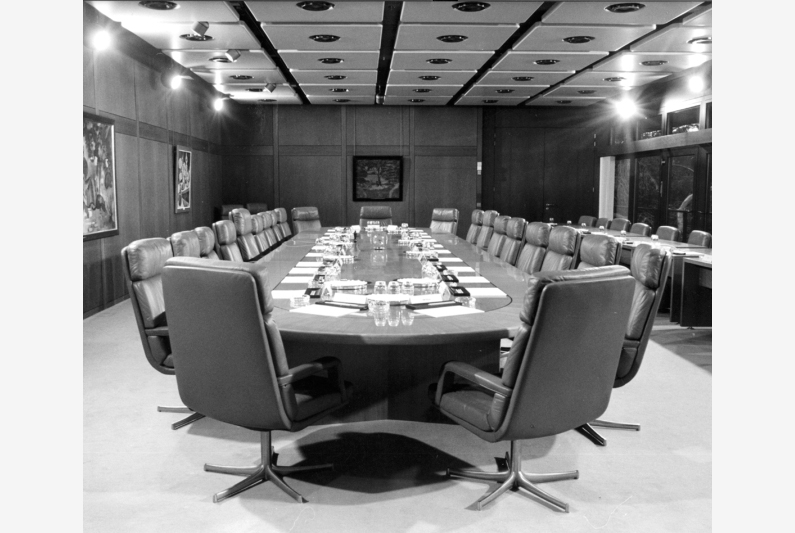 The cabinet room in the former Federal Chancellery has been preserved, along with the Chancellor’s office, 1998.
Bundesregierung/Julia Fassbender

In the summer of 1999, after only a few months in office, Mr. Schröder, along with the German Parliament, relocated to Berlin. There they took over the former East German State Council building, as the Federal Chancellery on Spreebogen was not yet ready for occupancy. The former Federal Chancellery on the Rhine River was ceded to the Federal Ministry for Economic Cooperation and Development, which is housed there to this day.

…that the architectural firm of Planungsgruppe Stieldorf (named after their location east of the Rhine) also designed the buildings known as the Kreuzbauten (1969-1975), which are located on the Rheinaue?