From 1949 to 2000, the sessions of the Deutscher Bundestag and Bundesrat were held in the Bundeshaus on today's UN campus in Bonn, 2018.
Stiftung Haus der Geschichte/Benjamin Westhoff
Members of the Parliamentary Council are on their way to the Bundeshaus on 23 May 1949. As President of the Parliamentary Council, Konrad Adenauer will anounce the promulgation of the Basic Law for the Federal Republic.
Erna Wagner-Hehmke/Hehmke-Winterer, Düsseldorf

The Bundeshaus in Bonn was from 1949-1999 the nerve centre of parliamentary democracy in the Federal Republic of Germany. It was here that the members of the Parliamentary Council – and later of both houses of Parliament – did their work and held debates. The eight-story apartment complex for MPs at the southern end of the facility is today part of the UN Campus.

In the former Bundesrat the foundation Haus der Geschichte presents the exhibition "The German Basic Law".

This house on the river Rhine, where on 7 September 1949 the Deutscher Bundestag (Lower House of Parliament) first convened, is the ideal venue for new beginnings. Its clean lines and white surfaces – the design language with which architect Martin Witte shaped the Pedagogical Academy (1930-1933) on this site, are restrained and pragmatic. The building is a far cry from the monumentalism of Nazi architecture – and indeed embodies an aesthetic that would have been abhorrent to the Nazi ethos. 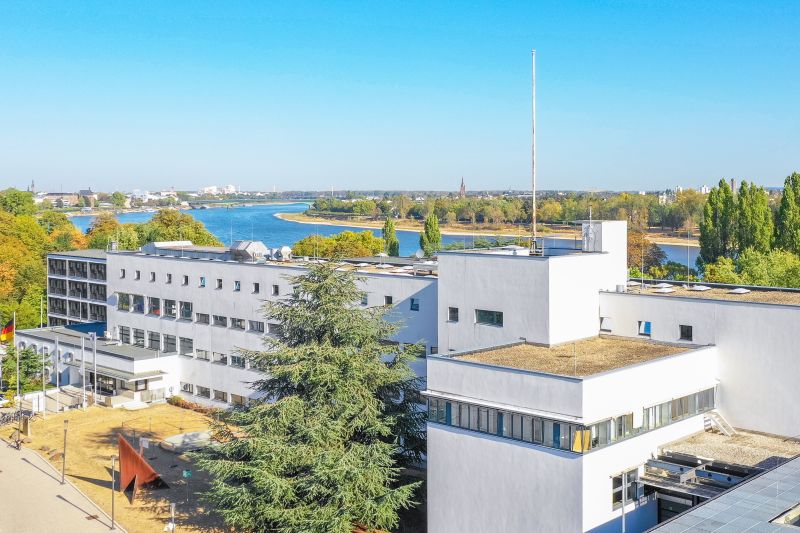 The Bundeshaus is located in the immediate vicinity of the Bonn bank of the Rhine, 2018.
Stiftung Haus der Geschichte/Benjamin Westhoff

Architect Hans Schwippert, who in 1949 enlarged the building into a “Bundeshaus” (“Federal Building”), was also committed to this aesthetic. Schwippert designed office wings for members of the Bundestag and for the Bundesrat (literally “Federal Council”), who met in what had once been the Academy’s lecture hall. Schwippert also designed a restaurant that had a glass wall facing the Rhine. He joined a plenary hall featuring extensive glass walls to the Academy’s gymnasium that he converted into a lobby (called “Wandelhalle”). “I wanted the German nation to be able to see the Parliament at work (...). I wanted to make a truly public building, an architecture that promoted social interaction and discourse.”

Schwippert advocated for new architectural concepts (“New Objectivity”), but not all of them gained acceptance. For instance, his idea of arranging the parliamentary chamber seating in a circle and dispensing with a rostrum was rejected. The appearance of the bright glass walls deviates from the original plans in that new walkways were installed, along with daises for the press and diplomats, during the Bundeshaus’ first renovation in 1953. 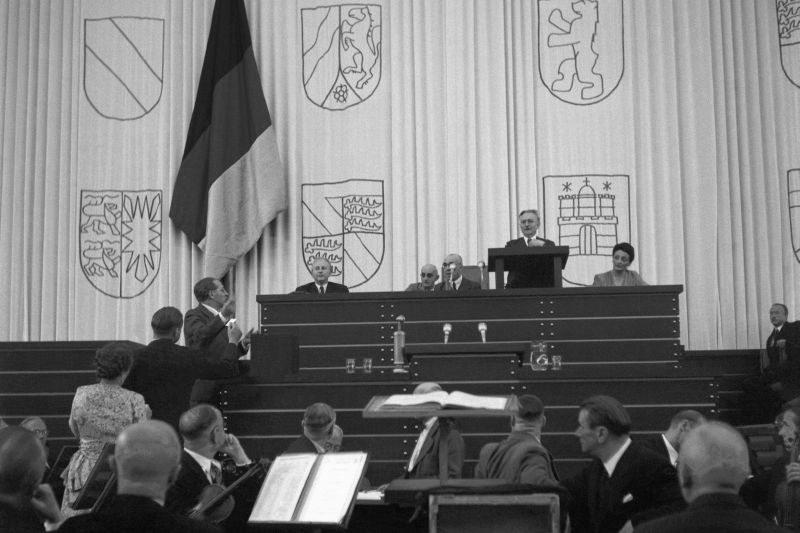 Nonetheless, the emphatically pragmatic architectural style of the structure sent a signal. Schwippert avoided what he termed "false and elaborate representation", up to and including for the appointments. Among the works of art in the Bundeshaus are the Federal Eagle (1953) by Ludwig Gies, whose work the Nazis called degenerate art. Gies renders the eagle as a round, fulsome and domesticated-looking bird whose nickname was the “fat hen”. The entrance of the office wing that was added to the Bundeshaus in 1951 is presided over by an Odo Tattenpach stone relief called “Ascending Phoenix” – a work that symbolically depicts the German nation as a mythical bird that burns and yet rises from its ashes rejuvenated. From the parliamentary chamber’s flagpole (located behind the rostrum) the black, red and gold banner of the 1832 Hambach Festival hangs. The banner was also the national symbol of the Frankfurt National Assembly in 1848 and of the Weimar Republic. 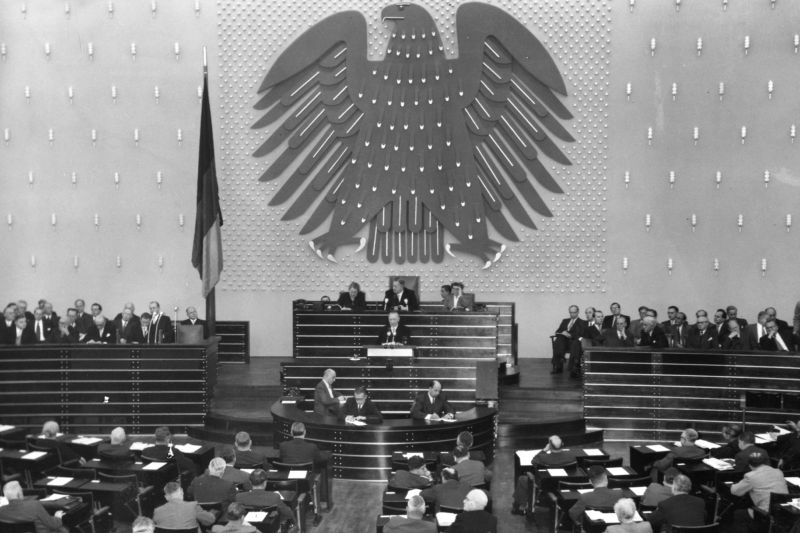 Until 1986, this parliamentary chamber was the nerve centre of parliamentary democracy in Germany. It was here that major debates were held on matters such as German rearmament (1952), the statute of limitations on Nazi crimes (1965) and Willy Brandt's policy of détente (1972). In this chamber, Herbert Wehner and Franz-Josef Strauß engaged in angry exchanges with each other, and Waltraud Schoppe’s 1983 speech about “everyday sexism” caused a furor. And it was here that Federal President Richard von Weizsäcker gave an historic speech on the occasion of the 40th anniversary of the end of World War II. In 1987 the German parliament moved to a temporary facility, while a new plenary hall was being built on the site of the old one. Construction began in 1988. The new building was dedicated in 1993, and after Parliament relocated to Berlin in 1999, the building was incorporated into the newly built World Conference Center Bonn.

The chairs from the old building, which author Wolfgang Koeppen once described as “a large classroom with tidy school desks”, are now part of the permanent exhibition at the Haus der Geschichte. You can even try them out there, and vote on the next speech that is given in Parliament.

… that the plaster eagle that Ludwig Gies made for the Bundestag building in 1953 is now in the collection of the Haus der Geschichte? The “fat hen,” as the sculpture is affectionately called, has been stored in a crate since the demolition of the old plenary hall in 1997. The temporary parliamentary chamber was graced with a wooden version of the Eagle, and the new parliamentary chamber in 1992 with an aluminium version.