The Palais Schaumburg’s modern canopy was not at all to the liking of Chancellor Adenauer, as it reminded him of a petrol station (2006).
Stiftung Haus der Geschichte/Axel Thünker
Among the members of Willy Brandt’s first cabinet were Minister of Finance and the Economy Helmut Schmidt (front left) and Interior Minister Hans-Dietrich Genscher (front right). The photo was taken on 7 November 1972.
Bundesregierung

From 1949 to 1976, Bonn’s Palais Schaumburg housed the Chancellery of the Federal Republic of Germany, which served as the government headquarters for all German Chancellors from Konrad Adenauer to Helmut Schmidt. Since the government relocated to Berlin in 2001, it has been used as a secondary official seat for the Chancellor.

Owing to renovation work, the Palais is currently closed to visitors. You can nevertheless view it using our online panorama.

A “kaiser tree” (in German: Kaiserbaum) of all things is supposed to be a reference to Chancellor Konrad Adenauer, when, in 1978, Chancellor Helmut Schmidt inaugurated the tradition of planting “Chancellor trees” on the grounds of Palais Schaumburg. Schmidt himself opted for weeping willow. 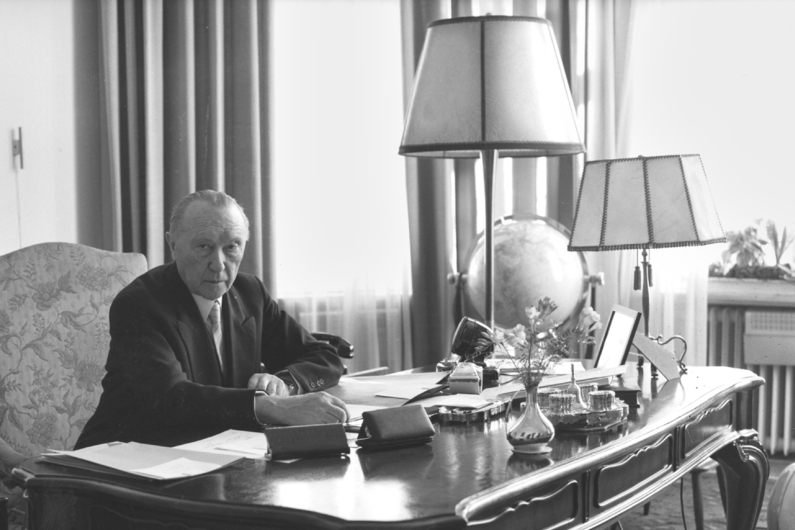 Chancellor Adenauer at his desk in Palais Schaumburg. The photo was taken on 8 February 1960.
Bundesregierung/Rolf Unterberg

So is a “kaiser tree” a good fit for Adenauer? Actually, it is. There’s one in just about every garden that was important to him. And it is precisely this type of tree – named as it is after the daughter of a tsar, and the favourite tree of Austrian Emperor Franz Josef – that evokes the building that was the official residence of all Federal Chancellors from 1949 to 1976: Palais Schaumburg (1858), a neo-classical-style villa that was built by a fabric magnate.

Viktoria von Preußen, Kaiser Wilhelm II’s younger sister, who was married to Prince Adolf of Schaumburg-Lippe, moved into the villa in 1894. She brought courtly splendour to the place, where the Kaiser stayed a number of times in what later became the cabinet room of the Federal Chancellor. Scandal was no stranger to Viktoria either: upon after Prince Adolf died, she got married again – but this time to a con man, and ended up impoverished. The German Reich bought the building, and in 1945 members of the British and Belgian occupation forces moved in.

When, in 1949, the Federal Republic was founded, the Palais Schaumberg was repurposed. 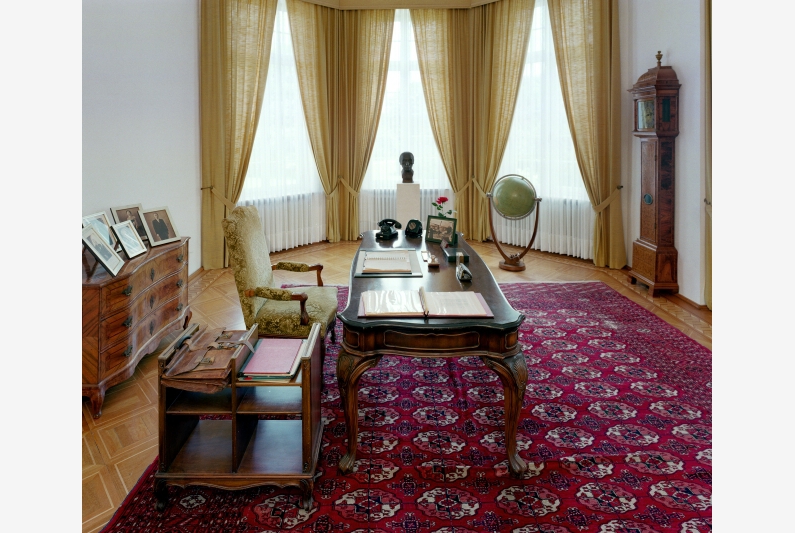 In 1983, Chancellor Helmut Kohl invited members of the press to view the renovated study of former Chancellor Konrad Adenauer. The photo was taken in 2005.
Stiftung Haus der Geschichte/Axel Thünker

Konrad Adenauer, who had been elected as the Federal Republic’s first Chancellor in September, wanted to move out of the provisionally furnished Chancellery Room at Zoologisches Museum Alexander Koenig as soon as possible. As early as October, he began making preparations for the moment when the Belgian troops would vacate Palais Schaumburg, and on 23 November he moved in.

At this juncture, tradesmen were beginning work on the building. At first, the tone of the correspondence between Adenauer and his architect Hans Schwippert was amicable: “Dear Dr. Professor Schwippert”, Adenauer wrote on 2 December 1949, “I would be greatly appreciative if the remodelling at Villa Schaumburg could be expedited to the greatest possible extent. In their current state, the villa’s rooms are not at all suitable for use as offices.”

But then, both sides took a different tone. For one thing, Adenauer soon found the white walls too bright, the chairs too green, the desk too low and the bathtub too small. And then there was the new modern staircase – and a new canopy that looked like a petrol station. Schwippert apparently tried to get rid of the antique furniture that Adenauer had purchased, too. But at least on the interior design front, Adenauer ultimately prevailed.

During his tenure as Chancellor, Adenauer also made good use of the places at and aspects of Palais Schaumburg that were conducive to peace and tranquillity: the private rooms, to which he withdrew to rest for lunch (and for which he paid a small rent); the grounds, where he took strolls with advisors such as State Secretary Hans Globke; the quick commute to his home in Rhöndorf, in a chauffeured Mercedes limousine, and via the Rhine ferry. 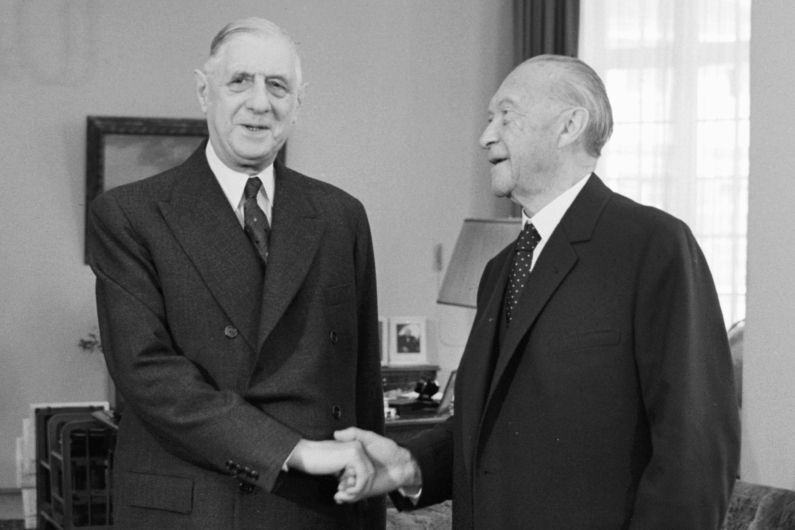 With the passing years and the succession of Chancellors – Adenauer, Erhard, Kiesinger, Brandt and Schmidt – space was increasingly at a premium, and two additions didn’t do much to ameliorate the situation. It was not until 1969 that a new building was commissioned for construction in the area between Palais Schaumburg and the Bundeshaus. The building was completed in 1976.

But the paucity of space at Palais Schaumburg was also part of its charm. “For all its imperfections, I was always fond of Palais Schaumburg,” wrote Klaus Harpprecht, who was Willy Brandt’s speechwriter and who worked out of Palais Schaumburg’s small tower room. “A blithe potpourri of Biedermeier and Victorian elements, somewhat bizarre – but altogether likeable, like so much that is not stylistically pure. (...) Creaking floor boards under the carpets. Kind of like the White House”.