Opening ceremony of the Parliamentary Council
1948–1957

On 1 September 1948, the opening ceremony for the Parliamentary Council was held at Zoologisches Museum Alexander Koenig – where upon the founding of the Federal Republic in 1949, the new nation’s first Chancellor, Konrad Adenauer, and his staff worked for a time.

“Never before was a state ceremony, that was meant to usher in a new chapter in the annals of a great nation, held in such a bizarre setting,” constitutional lawyer Carlo Schmid, one of the authors of the "Grundgesetz" (Basic Law), wrote in his memoirs about what took place on 1 September 1948 at Zoologischen Museum Alexander Koenig. “In the main hall of this edifice comprising massive blocks of stone, we stood, the flags of the federal states above us, taxidermied animals from the four corners of the world all around us, feeling somewhat out of place in this exotic wildlife scenery.” 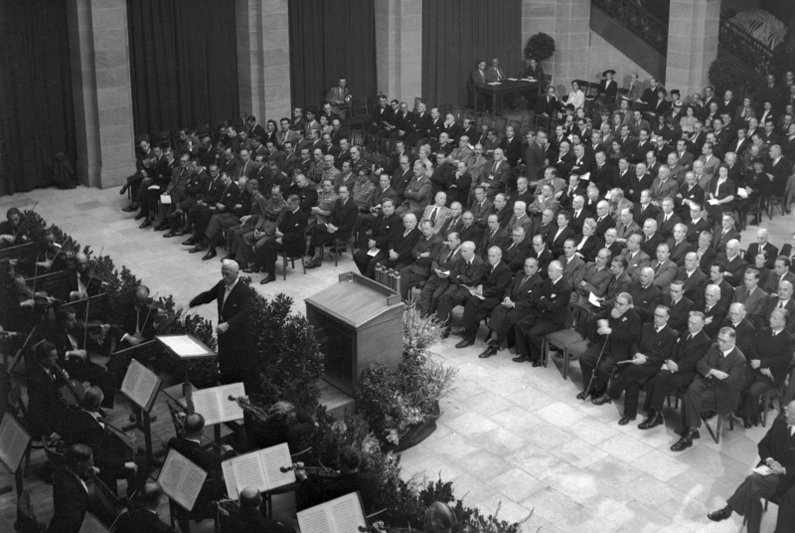 On 1 September 1948, a ceremony marking the inauguration of the Parliamentary Council was held at Museum Koenig.
Erna Wagner-Hehmke/Hehmke-Winterer, Düsseldorf

The date was 1 September 1948, and the event Schmid is describing here was the opening ceremony of the Parliamentary Council, which had been formed to draft the new nation’s Basic Law. The venue was the atrium of the natural history museum.

Archival photos of the event reveal that the setting wasn’t as “earthy” as Schmid made it out to be, however. Thanks to the use of heavy drapery, the animal “attendees” were concealed from view, and the only animals the human attendees could actually see were a handful birds in glass cases on the upper level. As for the flags of the various federal states, they were out in front of the building, not inside it. But Schmid’s characterisation of the setting as bizarre was spot on. The federal-state flags underscored that, already at this juncture, in the three Occupation Zones there were democratically elected parliaments, all of which had elected the 65 members of the Parliamentary Council, which was now convening for the first time. 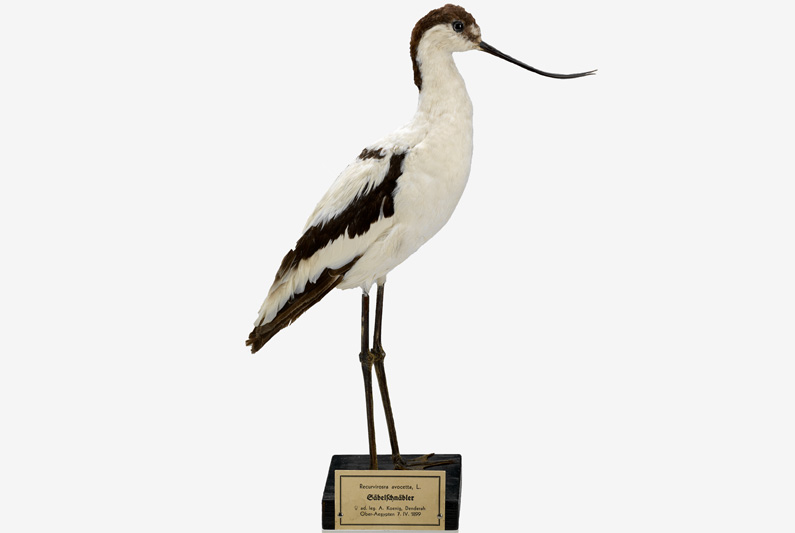 This pied avocet, which Alexander Koenig brought to Bonn in 1899 from a Nile expedition, is in a showcase on the gallery in 1949.
Stiftung Haus der Geschichte/Axel Thünker

The ambitious aim that united the members of the parliamentary council was to avoid making the same mistakes that had led to the collapse of German democracy in 1933. At the opening session of the Parliamentary Council on 1 September 1948, North Rhine-Westphalia Minister President Karl Arnold exhorted the Council members as follows: “Bear in mind that the Basic Law that you are about to draft must be to the liking of the German people, so as to ensure that their relationship with and faith in the basic tenets  of civic life remain intact. Each and every member of the German body politic must be imbued with the unshakeable belief that the government will do everything within its power to safeguard and guarantee their inalienable human rights and to ensure that the German people can live their lives  free from fear and anxiety.”

After the opening ceremony, the Parliamentary Council moved to the Pedagogical Academy on the banks of the Rhine, where they got down to the task of drafting the Basic law. It was in this building (which was only a short walk away from the bony “elephant” in the museum’s lobby) rather than at Museum Alexander Koenig, that on 23 May 1949, Parliamentary Council President Konrad Adenauer became the first person to sign the “Basic Law”, whose Article 1 states as follows: “Human dignity shall be inviolable.”

And yet, politics remained part of the museum, in that upon being elected Chancellor on 15 September 1949, Konrad Adenauer moved into the museum director’s second-floor study, which was bursting to the seams with books. It was not until November that he relocated from Museum Koenig to Palais Schaumburg. 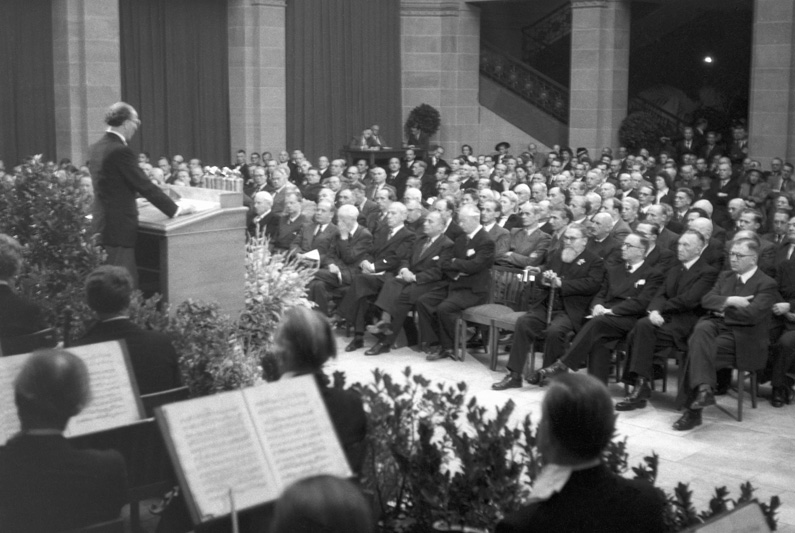 And even after that, many of his 120 staff members remained behind at the museum, onto which a 24-office addition was built for temporary use by the Office of the Chancellery. The Bonn historian Helmut Vogt noted the following: “In the spring of 1951, 17 offices were still in use here, two each for Vice-Chancellor Blücher and Chief of Staff Globke – plus the ‘Montagehaus’ in the garden (an interim structure for federal institutions). In the meantime, the motor pool had been moved, along with the Bundesrat’s, to the former Ermekeil barracks.” 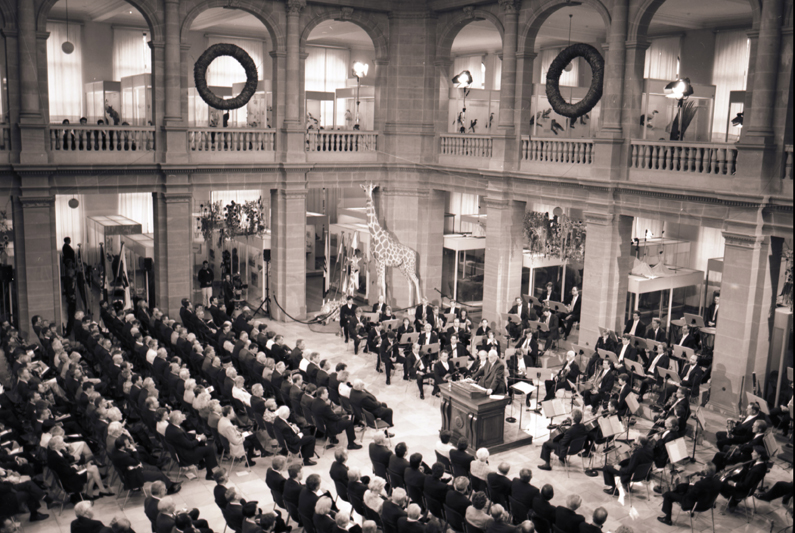 On 1 September 1998, 50 years following the inauguration of the Parliamentary Council in Museum Koenig, a major celebration was held there. This time the giraffe can watch from the back corner of the hall, which was covered in 1948.
Bundesstadt Bonn/Michael Sondermann

The museum and research institution that zoologist Alexander Koenig installed on his property in 1912 was confiscated by the Prussian government during World War I and was used by French occupation forces beginning in 1918. The museum was not returned to its rightful owners until 1926, and the museum finally opened in 1934. It remains one of Germany’s largest natural history museums, and houses the Leibniz Institute for Animal Biodiversity.

... that in 1948 the Parliamentary Council counted four “mothers of the Basic Law?” among its membership – namely Friederike Nadig (SPD), Elisabeth Selbert (SPD), Helene Weber (CDU) and Helene Wessel (Zentrum). Inclusion in Article 3 of the statement “Men and woman shall have equal rights” was largely due to the efforts of Elisabeth Selbert, who proposed this wording and mounted a successful protest campaign when the Council initially rejected her proposal.