The building of the former infantry barracks at Ermekeilstraße 27, erected in 1883, is now a listed building.
Bundesstadt Bonn/Michael Sondermann

The Amt Blank paved the way for postwar establishment of the German armed forces, the Bundeswehr. Beginning in 1955, this former army barracks was the first headquarters of West Germany’s Ministry of Defence (Bundesministerium für Verteidigung), which in the 1960s relocated incrementally to Hardthöhe.

When the decision was made to install the temporary seat of government in a city on the Rhine, the vacant barracks available in Bonn were one of the factors that made it an appealing choice. One such facility – a Norman-style infantry barracks dating from 1883 – was located on Ermekeilstraße, on the site of a former horticultural enterprise previously owned by the Ermekeil family. In the post-1949 period, a number of government agencies were located there, among them the Ministry of Displaced Persons, which was headquartered here from 1950 to 1952.

But the principal occupant of the Ermekeil barracks was a government agency know as the Amt Blank – short for "Dienststelle des Bevollmächtigten des Bundeskanzlers für die mit der Vermehrung der alliierten Truppen zusammenhängenden Fragen" – or Office of the Federal Chancellor’s Plenipotentiary for Matters Related to the Increase of Allied Troops. A member of the Christian trade union movement and a World War II veteran named Theodor Blank was named director of the office in October of 1950. He initially worked out of Museum Koenig, where he had been tasked with laying the groundwork for German rearmament – a subject of heated debate in Germany and abroad. 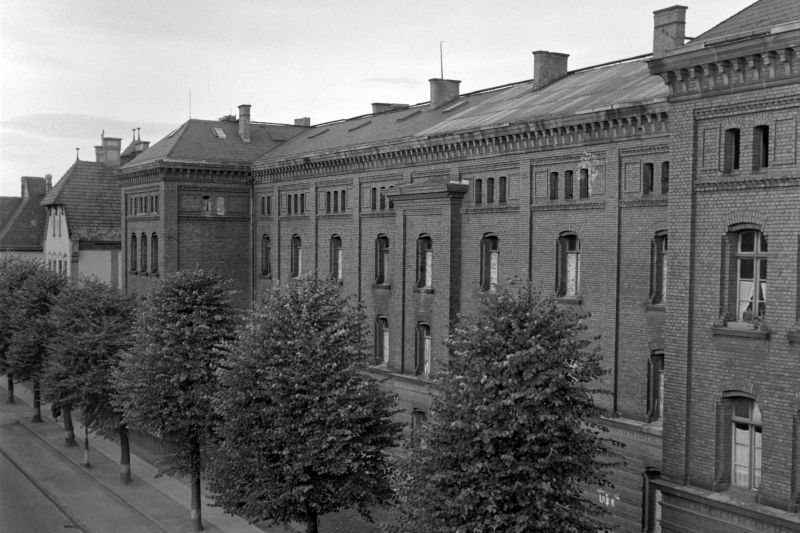 By 1953, the workforce at Ermekeilstraße numbered 700. Their tasks included developing the principles governing “internal leadership” of future soldiers – including the exemplar of the “citizen in uniform.” The term was coined by SPD defence policy advisor Friedrich Beermann, before being adopted by Amt Blank.

When, in May of 1955, the Bonn-Paris conventions came into force (thereby also terminating the Occupation Statute), Chancellor Adenauer said the following during a ceremony at Palais Schaumburg: “Germany – as a free nation among free nations – is now a genuine ally of the former occupying powers”. West Germany was now a member of NATO. On 7 June 1955, the agency on Ermekeilstraße, whose workforce had meanwhile grown to 1,300, was officially renamed the Ministry of Defence. On 12 November 1955, the first 101 volunteers of the new German armed forces – only 12 of them were in uniform – officially accepted their certificates of appointment at the barrack’s vehicle depot.

Thus the site also counts as the birthplace of the Germany’s postwar armed forces, the “Bundeswehr” – an “army without pathos,” whose name was promulgated by a law entitled "Gesetz über die Rechtsstellung der Soldaten" (Law on the Legal Status of Soldiers) from 20 March 1956. In the years after 1960, the Ministry moved to Hardthöhe in Bonn-Duisdorf.