The Beethovenhalle – here on a picture from 2006 – is currently undergoing fundamental renovation.
ullstein - Elmar Hartmann

Between 1974 and 1989, the Federal Convention gathered in Beethovenhalle to elect Germany’s Federal President. The building was also used for receptions, balls and party conventions.

The inaugural meeting of the Federal Convention was held at the Bundeshaus in Bonn on 12 September 1949. For the four ensuing sessions held to elect Germany’s Federal President, the members of the Federal Convention went to West Berlin, for symbolic reasons – namely that West Germany claimed to be the sole rightful successor of the German Reich. Nor had the Convention given up on the idea that Germany would one day be reunified and that Berlin would become its seat of government. Needless to say, the Soviets Union took a dim view of these meetings – to the point of sending fighter planes over the Berlin venue of the 1969 Federal Convention meeting. 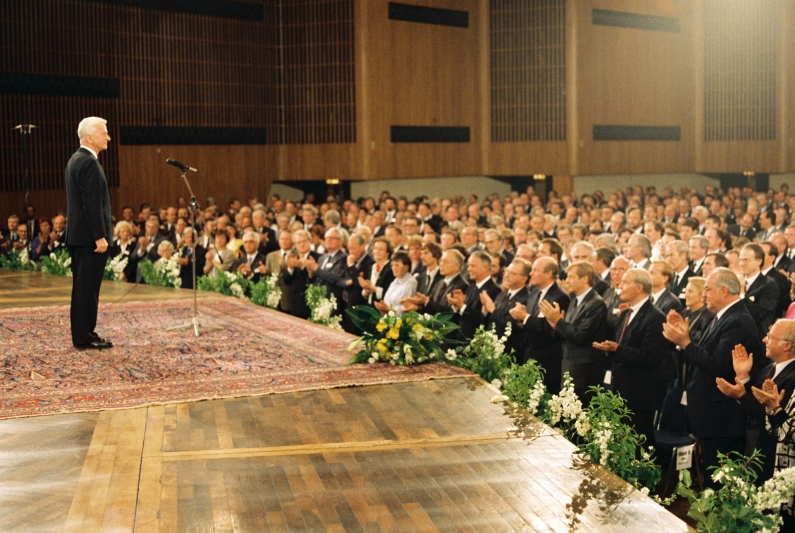 The Federal Convention elected Richard von Weizsäcker as Federal President on 23 May 1989 in the Beethovenhalle. This was his second term in office.
Bundesregierung/Engelbert Reineke

From the standpoint of architectural history, the hall is regarded as an example of an organic architectural concept. Designed by Siegfried Wolske (who studied under Hans Scharoun) and completed in 1959, at the time of the building’s dedication in that same year, shortly before the opening of the Beethoven Festival, the Stuttgarter Zeitung newspaper commented that the building was notable for “a simplicity that is neither exaggerated nor understated. It is moderate, but is surely bound to become a prominent feature in the Bonn cityscape, even if Bonn ultimately loses its status as the capital of Germany.”