Built in 1912 on behalf of a perfume manufacturer from Cologne, the hotel on the Petersberg offers a breathtaking view of the Siebengebirge and the Rhine Valley, 1997.
Bundesregierung/Lothar Schaack

The Allied High Commissioners were headquartered in this luxury hotel on Mt. Petersberg from 1949 to 1952. Since 1954, the hotel has been the German government’s guest house for state visits.

However, the Allied Occupation, which began upon the defeat of the Nazi regime by the Allies in 1945, wasn’t over yet, given that in September 1949, the Allied High Commission commandeered the luxurious Hotel Petersberg, located on one of the Siebengebirge mountains, as its headquarters. British Prime Minister Neville Chamberlain stayed in this very same hotel in 1938 in the lead-up to his meeting with Hitler, which resulted in the Munich Agreement. The fact that the Allies chose to locate their headquarters on a mountaintop sent a clear signal that in Germany, the Allied Commission was in charge. 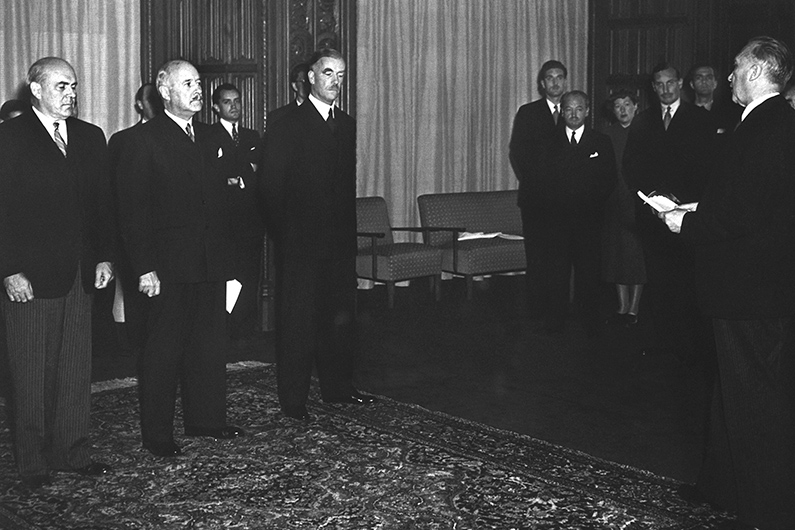 The Commission oversaw the Occupation Statute, which the victorious Allies adopted in April 1949 and promulgated on 10 May of that year. The Statute stated as follows: “During the period in which it is necessary that the occupation continue, the Governments of France, the United States and the United Kingdom desire and intend that the German people shall enjoy self-government to the maximum possible degree consistent with such occupation. The Federal State and the participating Länder shall have, subject only to these limitations, full legislative executive and judicial powers in accordance with the Basic Law and with their respective constitutions”. That meant that in effect, the Federal Republic enjoyed national sovereignty to a limited degree only. The occupation authorities made all decisions concerning Germany’s foreign policy, foreign trade, currency transactions, reparations and demilitarisation. They also reserved the right “acting under instructions of their Governments, to resume, in whole or in part, the exercise of full authority if they consider that to do so is essential to security or to preserve democratic government in Germany or in pursuance of the international obligations of their Governments.” 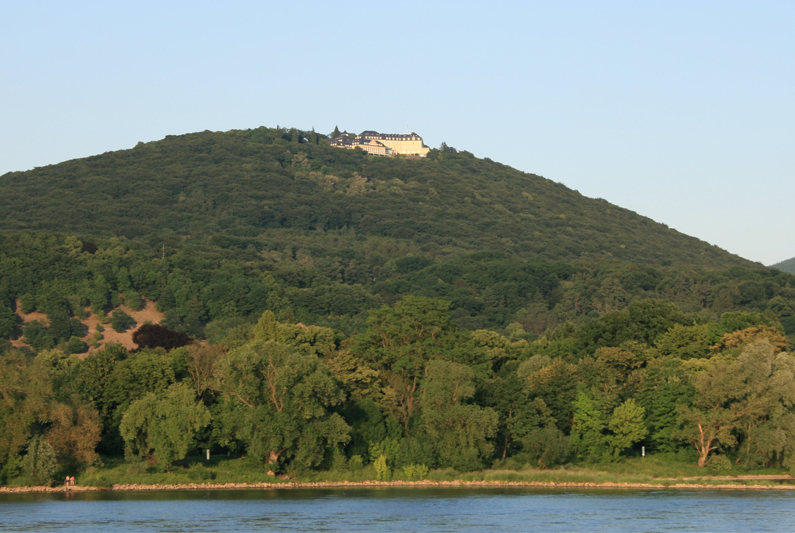 The Grandhotel sits on top of the mountain St. Petersberg. Not only is the location idyllic, it also facilites safety precautions for international conferences, 2009.
Sir James, Bonn Petersberg 2009 06 01 cropped, CC BY-SA 3.0 DE

Chancellor Konrad Adenauer was feeling very self-confident on the occasion of his first visit to the occupation authority headquarters on 21 September 1949, given that, prior to the meeting, he had managed to persuade Allied High Commissioners John J. McCloy, Brian Robertson and André François-Poncet to treat the hand-over of the Occupation Statute as a less momentous occasion than originally planned. “The High Commissioners,” Adenauer wrote in his memoirs, “had originally intended to receive me while standing on a carpet in front of which I would be standing” – the idea being that Adenauer would not step on the carpet until he had given a speech.

Adenauer refused to go along with this, however. During the introductory remarks, he stepped on the carpet and afterwards gave his speech there. And then something almost went astray between the speeches and a glass of sparkling wine. “When [German diplomat and Adenauer spokesman Herbert] Blankenhorn (who was with me) and I put on our coats in the cloak room, an official from the Allied High Commission came up to Blankenhorn and handed him a book wrapped in wrapping paper.” Or at least this is how Adenauer described the scene. According to Adenauer, when Mr. Blankenhorn unwrapped the book, it turned out to be the Occupation Statute – but “unsigned.” 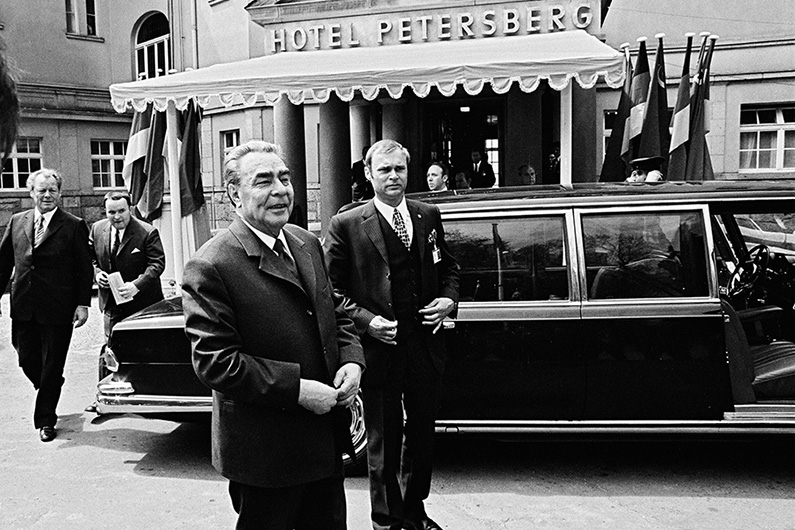 On the occasion of his state visit, CPSU Secretary General Leonid Brezhnev was received in the Petersberg Hotel, 1973.
Bundesregierung

Far from being self-serving, this little anecdote is in fact true. Adenauer, who had acquired international-policy acumen during his 16 year tenure as Lord Mayor of Cologne (1917–1933), managed to wrest additional, legally binding concessions from the Commissioners. The Petersberg Agreement, which was signed on 22 November 1949, took some of the sting out of the Occupation Statute and ushered in the process of Germany’s integration into the community of Western nations. The Statute was officially repealed by the General Treaty of 26 May 1952, which came into effect after the Bonn-Paris conventions of 1955 had been ratified. After this, the Federal Republic of Germany was by and large a sovereign nation, joined NATO and the (now defunct) Western European (WEU), and was even allowed to rearm.

In 1952, upon promulgation of the General Treaty, the Allied High Commissioners withdrew from Germany and the Grand Hotel reopened two years later. The German government used it as a guest house for state guests, albeit intermittently. Regular hotel operations were discontinued in 1969, and thereafter only one official guest, the Soviet head of state Leonid Brezhnev, actually stayed there in 1973. 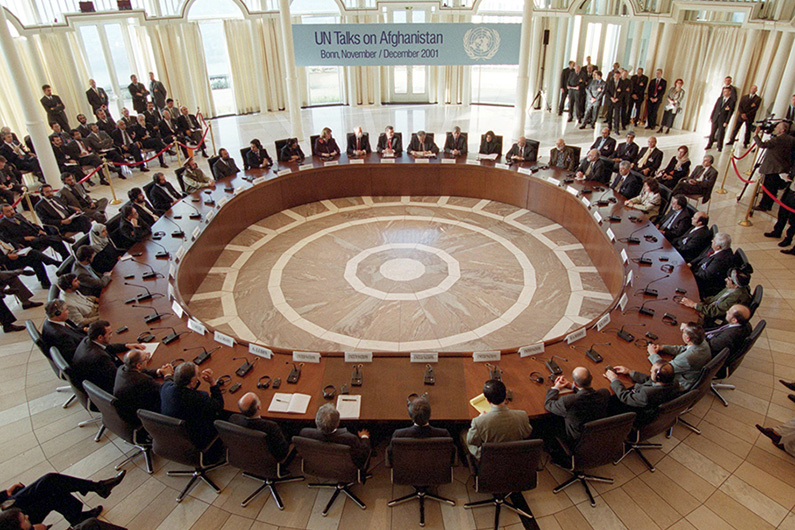 After purchasing the hotel in the late 1970s, the federal government extensively refurbished the building, a project completed in 1990. The edifice, which dates from 1892, had been enlarged and transformed into a spa hotel by Mülhens 4711 owner Ferdinand Mülhens prior to World War II. The building was used for official state guests in the 1990s – although as a hotel of the Steigenberg chain of hotels, it also attracted private guests. The hotel still officially functions as the Guest House of the Constitutional Bodies of the Federal Republic of Germany in tandem with its normal operations: the road leading to Mt. Petersberg can be sealed off at very short notice, as was done for the 2001 and 2011 Afghanistan conferences.

... that the elaborately bound edition of the Occupation Statute that was produced for the ceremony at Grandhotel Petersberg was printed by the Bonn printing company JF. Carthaus?