Residential and reception building of the German Chancellors
1964–1999

The Kanzlerbungalow, located on the grounds of Palais Schaumburg, was the residential and reception building of the German Chancellors from 1964-1999.

Visitors need to register in order to visit the Kanzlerbungalow.
Visitor information

At one time, the news that Chancellor Ludwig Erhard had decided to have an official Chancellor’s residence constructed on the grounds of Palais Schaumburg – and with a swimming pool no less! – caused an uproar. But visitors to the edifice now known as the Kanzlerbungalow (1964) are still somewhat taken aback at the narrowness of the main residential-wing rooms, and the unusually small size of the swimming pool, which is six metres long by three metres wide. The transparency of the prosaic building and its many glass facades that constitute the edifice’s exterior are almost reversed in the private wing, in that the bedrooms have no windows facing the grounds. A glass wall with a sliding door in it merely leads to a tiny patio – and thus all the occupants have to rest their gaze on are the swimming pool and the rooms on the opposite side of the patio. 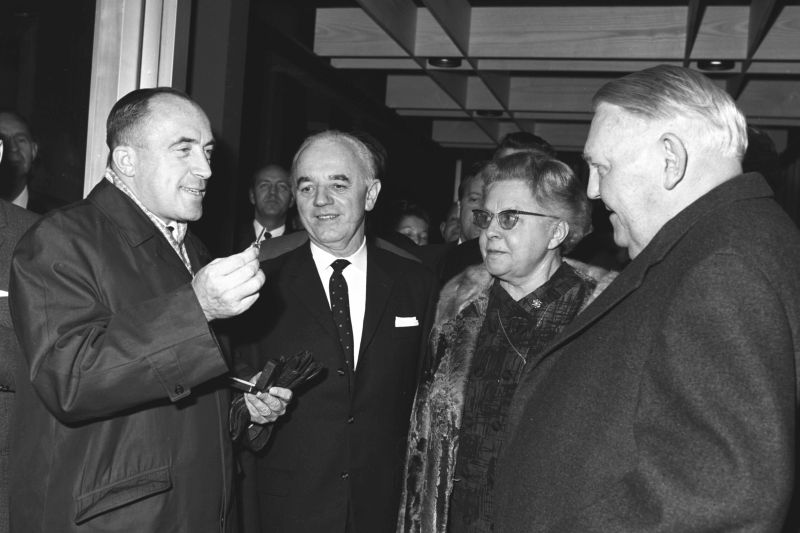 But the criticism that was initially levelled at the Kanzlerbungalow was actually prompted by other things: the fact that the very politician who preached moderation and who, in the debate over funding to aid war victims, came out in favour of keeping the expenditures low, built himself an 800 square metre residence with a pool. Plus, they pointed out, this Chancellor had the temerity to express outrage at the Bundestag Budget Committee’s desire to limit the Kanzlerbungalow’s construction expenditures to two million Deutschmarks. Some observers were extremely puzzled not only by this, but also by the architectural style of the residence and by Chancellor Erhard’s decision, in light of the negative media reaction to how the project turned out, to exclude the press from the May 1964 topping-out ceremony. “I fear,” former Chancellor Konrad Adenauer said in 1967, “this place is simply unliveable.” 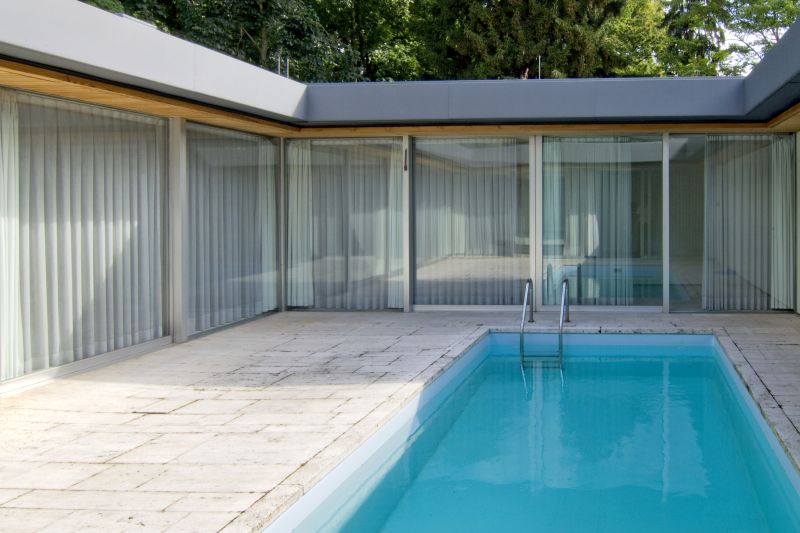 But Mr. Adenauer was mistaken, for as it turned out, German chancellors had no difficulty living and working in the Kanzlerbungalow – even though the ambience was never as relaxed as when pop star Udo Jürgens performed for Chancellor Kurt Georg Kiesinger or when Helmut Schmidt played the piano. Nor did luminaries pop in every now and then. Although Richard Nixon, the G7 heads of state or royalty from Japan or The Netherlands came to stay at the Kanzlerbungalow – all of whom had been put up there by Chancellor Willy Brandt and Federal President Gustav Heinemann. And yet, this low-rise edifice was a place where government policy was shaped, and where rest and relaxation were valued.

The ultra modern architecture of the Kanzlerbungalow (1964) differed greatly from the official residences in other countries, such as the White House in the US, 10 Downing Street in the UK, and the Elysée Palace in France. The edgy architecture was deliberately intended to be a complete departure from that of the Nazi period. The Kanzlerbungalow was designed by Sep Ruf, who had previously designed a private residence for Ludwig Erhard (1954-1955) on Lake Tegernsee. The private spaces and those used for official functions in the Kanzlerbungalow are systematically separated from each other.

None of the Chancellors have really taken to the Kanzlerbungalow, except for Ludwig and Luise Erhard and Helmut and Hannelore "Loki" Schmidt, who appreciated the evocations of the Bauhaus style and the building’s grounds, and who lived there for eight years. Chancellor Kurt Georg Kiesinger compared the Kanzlerbungalow to an uncomfortable sleeping car, remodelled the interior, and got rid of the residence’s Hermann Miller designer furniture.

"I don't know which architect built the bungalow, but he deserves ten years." 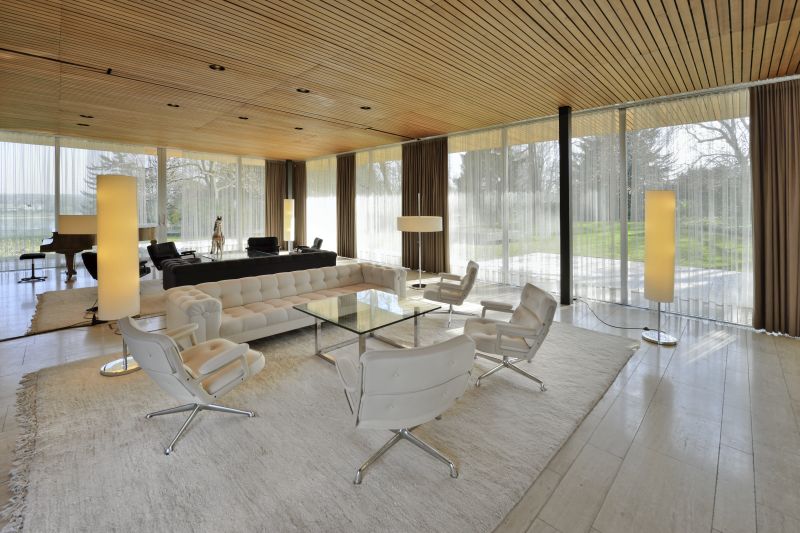 The reception room in the Kanzlerbungalow is located in the reception wing, 2014.
Stiftung Haus der Geschichte/Axel Thünker

But the structure also had certain advantages and served a useful purpose – namely that it enabled visitors to shed their public persona, be themselves and think out of the box. Not far from the Kanzlerbungalow, one of the most notable events of Chancellor Helmut Kohl’s tenure took place – namely the nocturnal conversation between Kohl and Mikhail Gorbachev, in June of 1989.

During the conversation, which was held on the banks of the Rhine, the two men talked about their lives and developed a personal bond. “I pointed at the Rhine and said: Look at the river that’s flowing by us. It symbolises history, which does not stand still. […] Just as the Rhine inevitably flows to the sea, so German reunification is bound to come – and European unity as well.” In his memoirs, Kohl wrote that after this conversation, Gorbachev began seeing things differently. 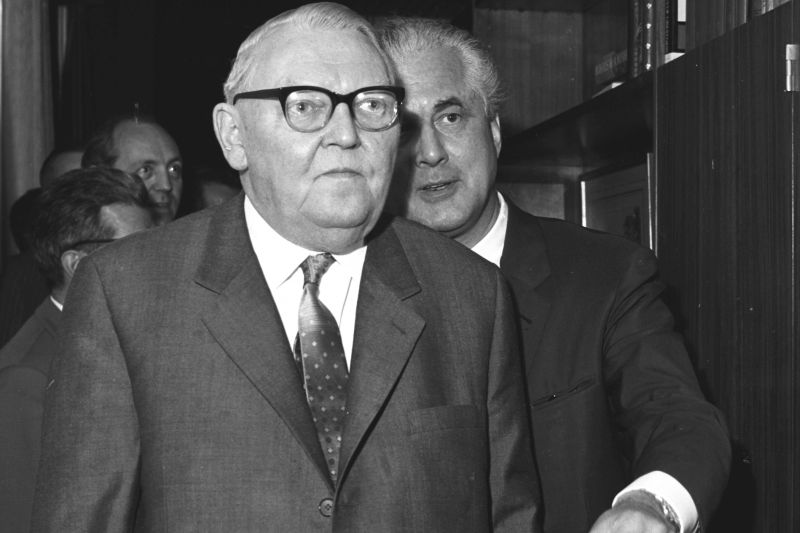 Chancellor Ludwig Erhard and architect Sep Ruf viewing the Kanzlerbungalow – the residential and reception building for German Chancellors – on the occasion of its dedication on 12 November 1964.
Bundesregierung/Ludwig Wegmann

Helmut Kohl resided in the Kanzlerbungalow until 1999. But Gerhard Schröder, who was elected Chancellor on 27 October 1998, decided against moving into the villa for the few months remaining until the transfer of the capital from Bonn to Berlin, and instead opted for Palais Schaumburg. Today, the Kanzlerbungalow, which has a 400 square meter underground emergency shelter, is open to the public.

... what kinds of things went on in the Kanzlerbungalow after Willy Brandt was re-elected Chancellor in 1972? German politician Egon Bahr recalled the following: “That evening at the Kanzlerbungalow was really something! Günter Grass claimed he absolutely had to kiss me, and proceeded to do so. Willy’s bear hugs were so intense, they almost hurt. Henry [Kissinger] phoned from Paris and it was Egon this, Egon that. Honecker made his first call ever to a German chancellor and sent his regards.”