The Berlin State Representation Office is housed in three Gründerzeit-style villas on Joachimstraße. The photo is of the building at 7 Joachimstraße, 2011.
Sir James, 2011-09-30 Bonn ehem LV Berlin A3644 Gronau, CC BY-SA 3.0

State Representation Office of the State of Berlin

The State Representation Office of Berlin has been housed in the Gründerzeit-style villa No. 6 on Joachimstraße, expanded by two villas (No.7 and No. 8) in 1959 and 1964. The building at No. 7 was designed by the prominent Bonn-based architect Julius Rolffs.

The history of the Federal Republic of Germany really begins long before the 1949 passage of the Basic Law and the first Bundestag election in that same year. As early as 1946, the occupying powers arranged for the election of federal-state (Länder) parliaments. The Parliamentary Council, which began drafting the Basic Law in September of 1948, was also elected by the federal-state parliaments in the occupied sectors of West Germany.

This enlarged the scope of the role assigned to the Länder by the Basic Law – which has in turn enabled them to have a greater say in federal policy and legislation via the Bundesrat. Moreover, the “eternity clause” of the Basic Law states as follows: “Amendments to this Basic Law affecting the division of the Federation into Länder, their participation on principle in the legislative process, or the principles laid down in Articles 1 and 20 shall be inadmissible.”

The federal-state representations in Bonn, which still had provisional seats at their disposal in the Rhineland-Palatinate city of Unkel until they moved into their own buildings in 1949, were in effect the embassies of the various Länder governments in the capital.

Some of them soon moved into older townhouses, as was the case with the Hamburg representation, which in 1950 moved into a building at what is today Kurt-Schumacher-Straße 18-20. Other federal-state representations built new headquarters for themselves, as was the case with the Bavarians – who were initially housed in what is today Adenauerallee, and subsequently had the Munich-based architect Sep Ruf design them a new building for a site at Schlegelstraße 1. 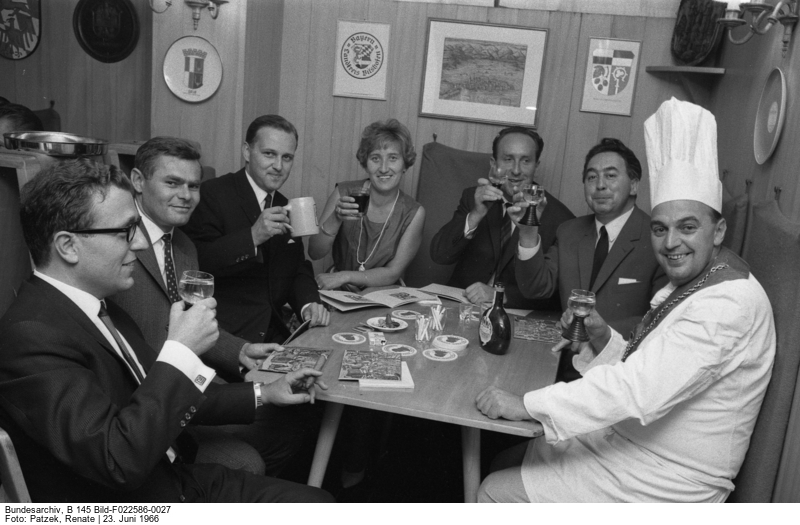 Bavarian specialities were tasted at a reception in the State Representation of Bavaria on 23 June 1966.
Bundesarchiv, B 145 Bild-F022586-0027/Photographer: Renate Patzek 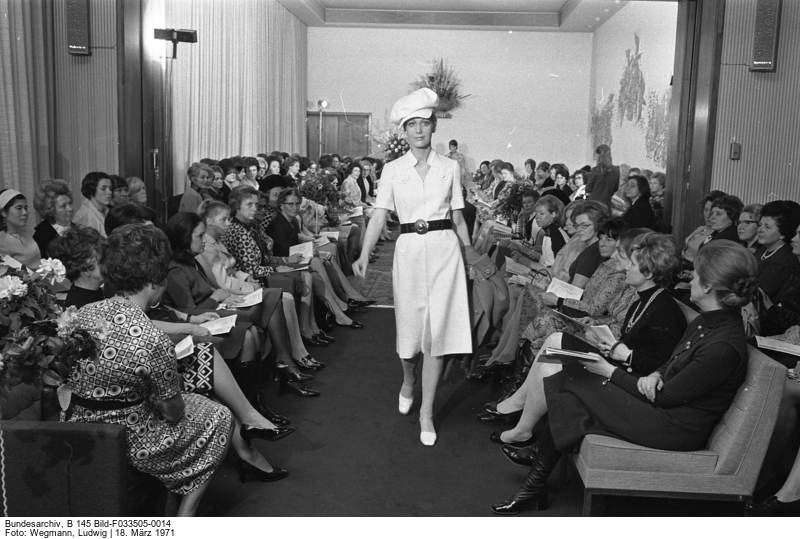 A fashion show on 18 March 1971 turned the State Representation of Baden-Württemberg into a catwalk.
Bundesarchiv, B 145 Bild-F033505-0014/Photographer: Ludwig Wegmann 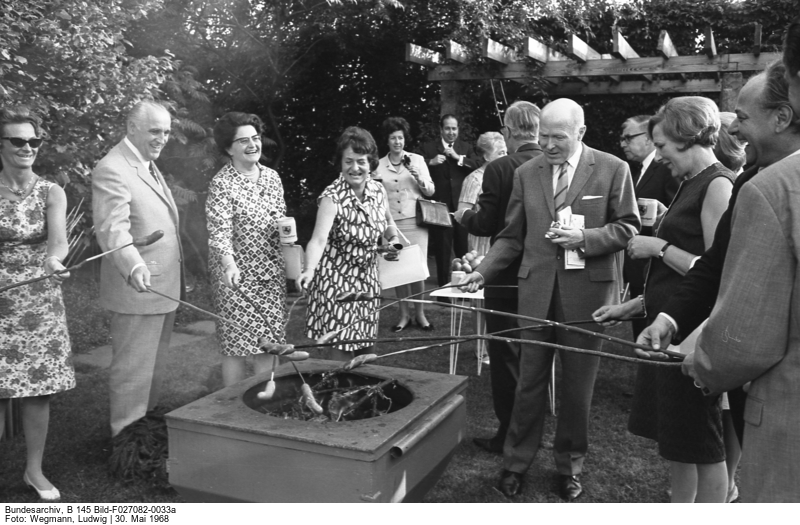 At the exhibition "Stuttgart today" on 30 May 1968, the guests had a sausage barbecue in the garden of the Landesvertretung Baden-Württemberg.
Bundesarchiv, B 145 Bild-F027082-0033a/Photographer: Ludwig Wegmann

From this vantage point, they observed political debates and decisions in the capital, advocated for policies in the realms of domestic Länder policy, business, science and culture – and forged alliances with other federal states, necessitated by the Bundesrat’s inherently collaborative and often complex work processes. Today, there are 16 Länder. 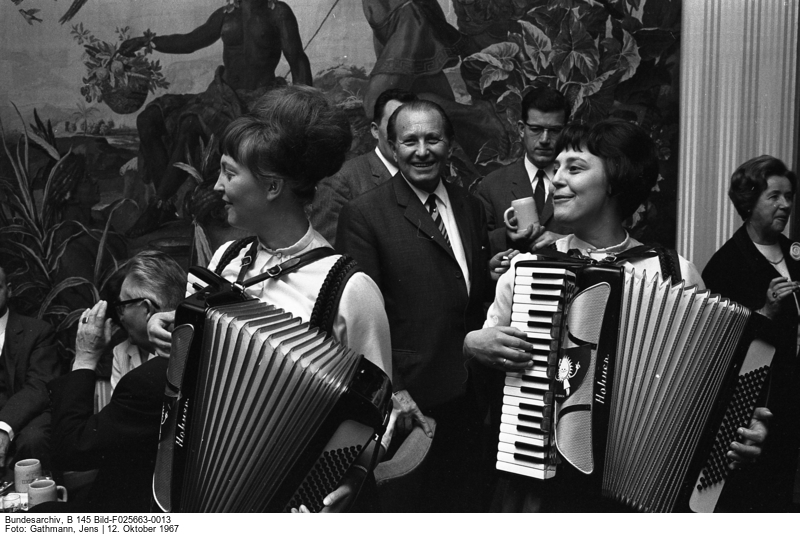 Accordion players performed at the opening of the exhibition "Land of special crops" on 12 October 1967 at the State Representation Office of the State of Baden-Württemberg.
Bundesarchiv, B 145 Bild-F025663-0013/Photographer: Jens Gathmann 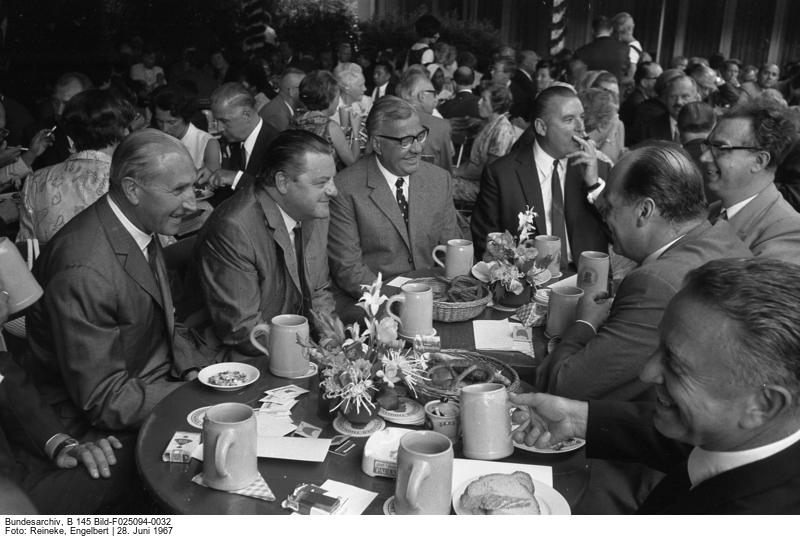 On 28 June 1967, the guests celebrated the summer festival in the State Representation of Bavaria with beer and pretzels, typical of the state.
Bundesarchiv, B 145 Bild-F025094-0032/Photographer: Engelbert Reineke 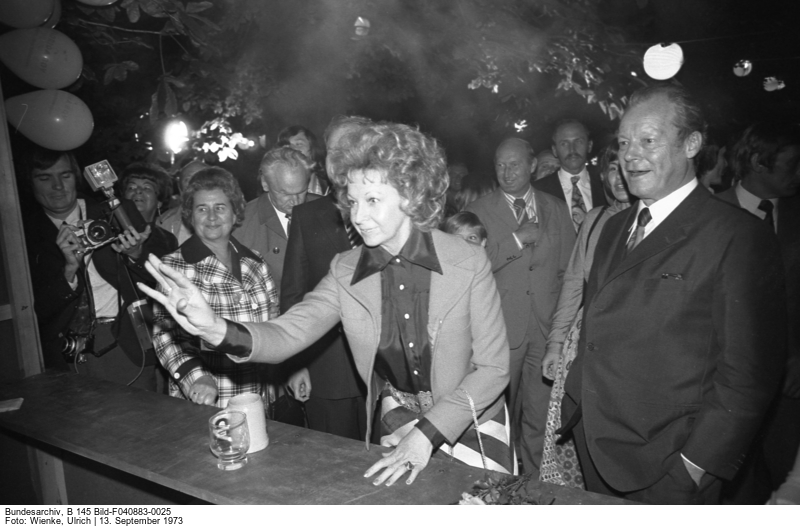 Federal Chancellor Willy Brandt and his wife Rut visited the "Laubenpieperfest" on 13 September 1973 in the State Representation of Berlin.
Bundesarchiv, B 145 Bild-F040883-0025/Photographer: Ulrich Wienke

As the German newsmagazine Der Spiegel put it, in 1998, “Like Carnival, annual summer festivities are central to the way denizens of the Bonn Republic see themselves. Scores of party staffers, civil servants, lobbyists and journalists roam the territory between the Rhine and Reuterallee as if they simply can’t get enough of it. ‘I’m still headed to Lower Saxony’, a department head called out to a colleague, waving casually with a set of event tickets in his hand.”

Today, the former state-representation headquarters are mainly used as office buildings. On the premises of the State Representation of Baden-Württemberg, there is a beauty clinic today.