Erich-Ollenhauer-Haus (built in 1975) was the headquarters of Germany’s Social Democratic Party (SPD) until 1999.

The architectural traces of the gigantic housing association called Neue Heimat (“New Homeland”), that was owned by Germany’s Federation of Trade Unions and which managed the association’s nearly 300,000 apartments at the beginning of the 1970s, are not always unworthy of mention. But this by no means holds true for a building constructed by the association’s construction subsidiary, south-west of the Bonn government district. From 1975 to 1999, the building was the headquarters of Germany’s Social Democratic Party (SPD), for which more than 40 percent of the electorate cast their second vote in the elections for the German Parliament from 1969 to 1980 – an accomplishment the Party was able to build on again in the 1998 elections. Three of Germany’s seven Chancellors during the Bonn era – Willy Brandt, Helmut Schmidt and Gerhard Schröder – were members of the SPD. 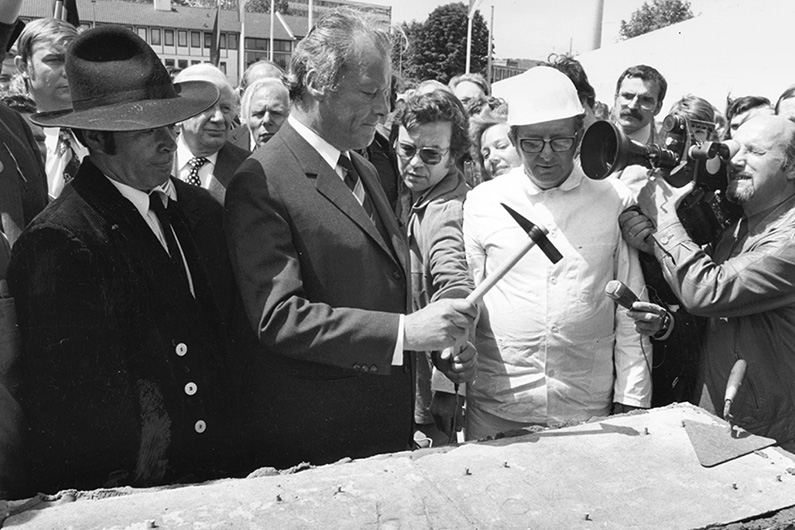 SPD chairman Willy Brandt lent a hand at the first stone laying for the new party headquarters on 7 June 1974.
Bundesregierung

When, in 1974, construction of the SPD’s new headquarters got underway, the nondescript buildings on the site (nicknamed “the barracks”) had to be demolished. Like many people, in 1949 Kurt Schumacher, the first SPD chairman of the post-war period, believed that Bonn would remain Germany’s capital for a relatively brief period. This belief prompted the party’s executive committee to obtain an only ten year lease on the site of the new building (which was located south of Bonn) and to include a clause in the lease that allowed for its cancellation in the event the German capital relocated to Berlin sooner than expected. The low-rise office buildings that were ultimately built (likewise nicknamed “barracks”) were light-construction prefabricated structures so as to enable them to be reused when the capital moved to Berlin. 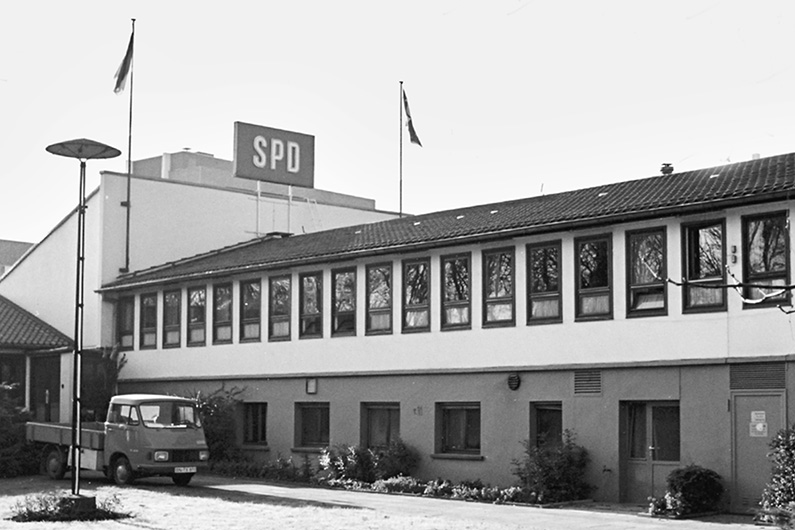 Under chairman Kurt Schumacher, the SPD built its party headquarters in 1950 in lightweight construction. The predecessor of the Erich-Ollenhauer-Haus goes down in SPD history as "the barrack", 1973.
Bundesregierung

This is precisely what happened when, in 1974, the “barracks,” which had been expanded a number of times, were removed to make way for a new building. After being dismantled piece by piece, the old buildings were reassembled on the site of a workers welfare association holiday home near Travemünde, a family recreation holiday site in Odenthal, and a children's and youth home in Hützel/Soltau.

In the meantime, at the “Diplomatenrennbahn” between Bonn and Bad Godesberg, an earth-toned, low-rise party headquarters was being built whose design had some features in common with that of the Chancellery, which was likewise under construction at the time. The building’s architects, Fritz Novotny and Arthur Mähner, described their aim for the edifice in a 1975 brochure: “We wanted to do justice to the down-to-earth orientation of the SPD, which meant eschewing external appeal so as to enable us to preserve the ambience of the ‘barracks’ and incorporate it into the new building.”

This concept was embodied by so called “communicative areas” and the building’s floor plan, which was meant to embody the SPD’s attitude toward governance: the ground floor of the new building was set aside for the organisation’s executive arm, while the second floor housed the elements of the party that dealt with organisational matters, youth work and international relations. 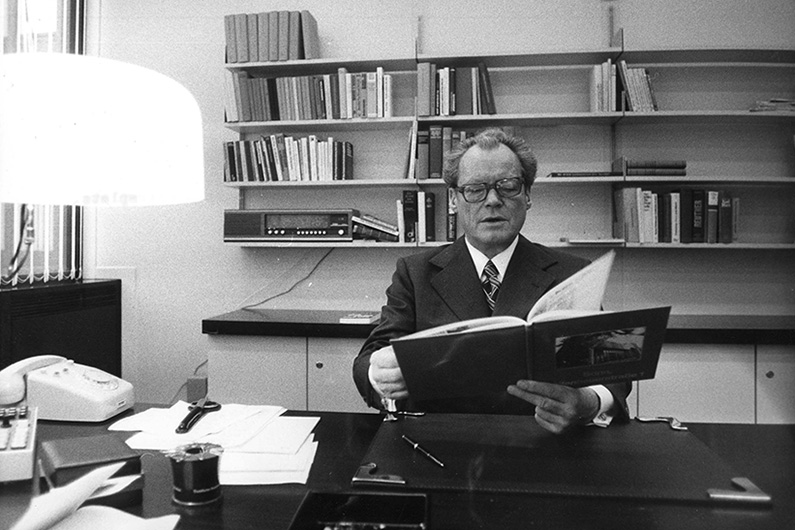 Chancellor Willy Brandt delivered a speech in his new office on the opening day of the Erich-Ollenhauer-Haus on 3 October 1975.
Friedrich-Ebert-Stiftung

The building was named after Erich Ollenhauer, who succeeded Kurt Schumacher as party chairman, a position he held from 1952 to 1963. One of his successors, Gerhard Schröder, symbolically closed the headquarters’ doors in July 1999. The poster that he left for the citizens of Bonn was inscribed with a quote from German author Theodor Fontane and a gingerbread heart. The quote went as follows: “Words of farewell should be as brief as declarations of love.” The gingerbread heart said, “See ya, Bonn.” Just like Schröder, many people undoubtedly felt.
Schröder had enjoyed enormous popularity ever since he said “This is the end of an era” at the post-election victory celebration at the party’s Bonn headquarters on 27 September 1998. The era Schröder was referring to was the tenure of Chancellor Helmut Kohl, whose supporters, at Konrad- Adenauer-Haus only a few hundred metres away, were trying to deal with the shock of losing the election. But shortly after this ebullient event, the Bonn era of the SPD also came to an end, when, in July 1999, the party’s executive committee moved into the, in 1996 opened Willy-Brandt-Haus in Berlin. The sign on the building emblazoned with the party’s large red logo was donated to the permanent collection of the Haus der Geschichte.

... that upon completing the framework of the CDU’s headquarters in 1970, construction workers put up a poster that said, “We support the SPD”? This gesture was prompted by their anger that instead of a topping-out ceremony, they were given 20 deutschmarks, and so they went to get the posters in the “barracks.”