This neo-classical villa (1860) was designed by August Dieckhoff, 2011.
dpa
The ground floor of Villa Hammerschmidt contains the rooms that were used for social functions, including the dining room, 2005.
Bundesregierung/Ute Grabowsky

You can visit the Villa Hammerschmidt by appointment.
To the visitor information

For the Mercedes 300, the limousine that Chancellor Konrad Adenauer ordered for himself in 1951, the official protocol stipulates that the license plate number is to be 0-003. But Adenauer, the “old fox”, managed to wrest the 0-002 license plate number from the Bundestag (Lower House of Parliament) President. However, Adenauer didn’t dare go after 0-001, for the simple reason that the Federal President, not the Federal Chancellor, is the head of state. In the wake of the nightmarish chapter of German history involving the Reich President of the Weimar Republic, the Federal President has a mainly ceremonial role. 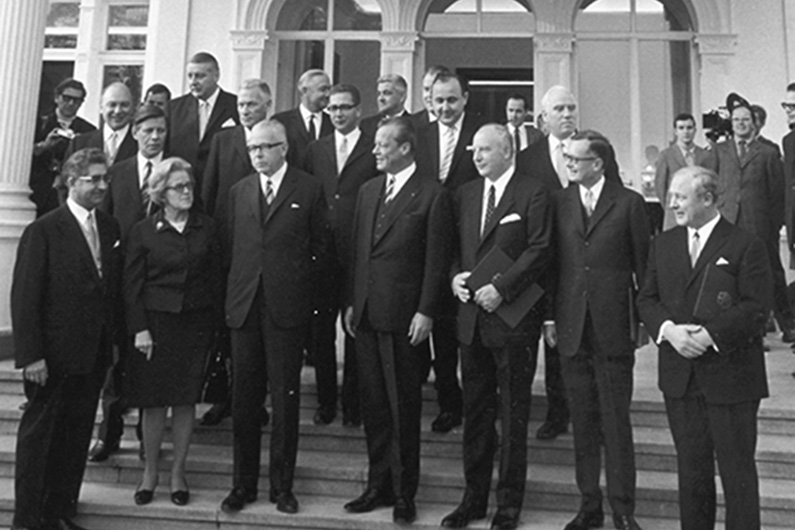 It is thus all the more fitting that in 1950 the Federal President moved into one of the most magnificent buildings on the banks of the Rhine in Bonn – Villa Hammerschmidt (1861), which was built by a businessman.
But the question arises: what is the holder of such an office to do with it? Theodor Heuss, upon being elected, on 12 September 1949, the first president of the Federal Republic of Germany by the Federal Assembly, described the office as a “welter of legal provisions”. The decisive question, he highlighted, was "how we, all of us together, can create on Office of the President that is something akin to a tradition, something like a force, something that possesses heft and a sense of perspective, and that can hold its own in the political power plays.” 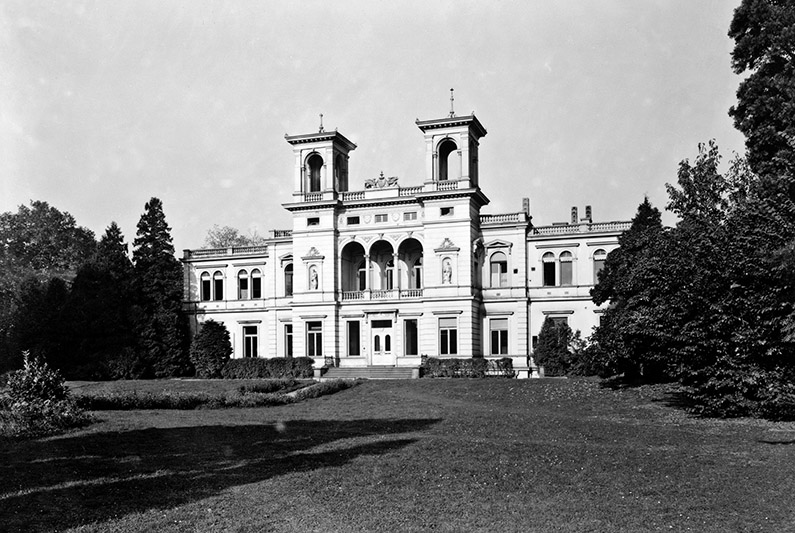 During a renovation of the building, its two turrets were removed, 1949.
Erna Wagner-Hehmke/Hehmke-Winterer, Düsseldorf

The highly accomplished academic Theodor Heuss, who was a German Democratic Party member of the Reichstag prior to 1933, as well as a Parliamentary Council member in 1948, tried to endow the role of Federal President with a kind of “casual dignity” (in the words of Joachim Radkau), during his ten-year tenure (1949–1959). Heuss wanted to embody what democracy is all about, and in his travels abroad earned back other nations’ trust in Germany, and spoke out against glorifying Germany’s recent past. As early as 1949 Heuss was talking about German collective guilt, “We need to broach the atrocious injustice that has taken place against the Jewish people.”

It was with this spirit that he imbued the role of President during his tenure. Heuss’s biographer Peter Merseburger put it this way: “Heuss became a moral authority, and gave the new nation recognisable contours and a human face. Though elected to an office totally lacking tradition, through his understanding of the office and the manner in which he exercised it, he was able to create a tradition that all of his successors have felt duty-bound to uphold.” In short, a citizen-President, “a President you can reach out and touch.”

Heuss had Villa Hammerschmidt freed from the “icing on the cake,” i.e. the two roof-top turrets, before, in 1950, relocating from his interim offices (a former Reichsbahn holiday home on Godesberg's Viktorshöhe) to the neighbourhood where the Federal Chancellery and Bundestag (Lower House of Parliament) were located.
“Papa Heuss,” as he was affectionately called, resided there until 1959, just down the road from Chancellor Adenauer. Every so often, these two men, whose thinking was so instrumental in shaping the fledgling Federal Republic, even met in private to exchange ideas. 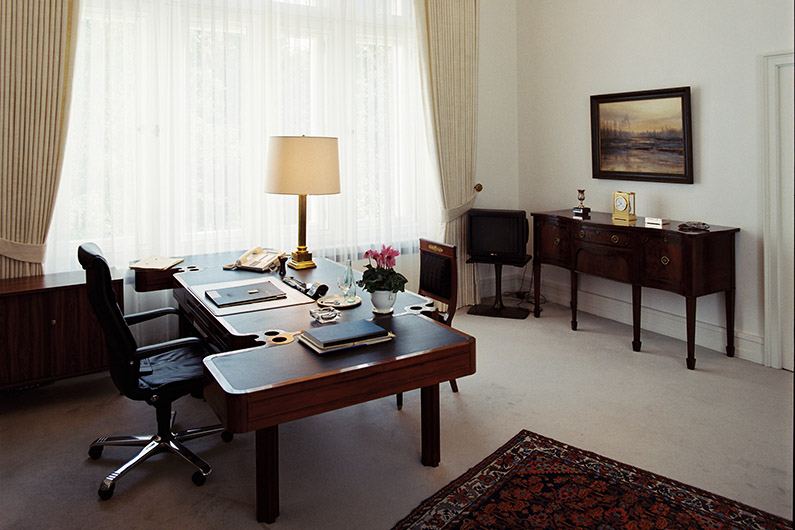 Visitors can visit the representative rooms in the Villa Hammerschmidt, as well as the study of Federal President Roman Herzog, 1996.
Bundesregierung/Arne Schambeck 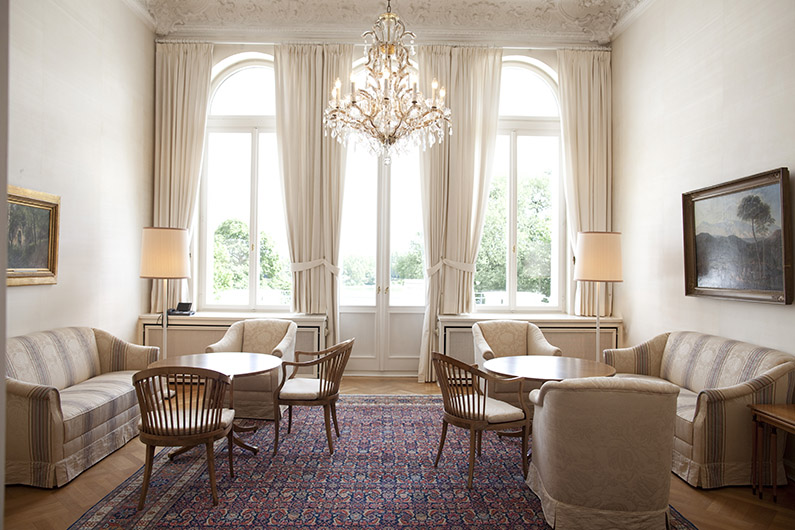 The furniture in the upper balcony room on the Rhine side of the villa was built in the style of the French Empire of 1830 and comes from Schloss Wilhelmshöhe near Kassel, 2011.
Bundesregierung/Ute Grabowsky

But the history of the Federal Presidents extends far beyond Heuss. Villa Hammerschmidt (named after cotton manufacturer Rudolf Hammerschmidt, who lived there from 1900 to 1929) was the residence and official seat of German heads of state right up through to the end of the tenure of the sixth Federal President, Richard von Weizsäcker. In the mind of the general public, Villa Hammerschmidt is mainly associated with visits to Germany by dignitaries who were received here, such as the Shah of Iran, in 1955, and Prince Charles and Princess Diana, in 1987. But ordinary citizens were also invited to visit – for example on the occasion of New Year receptions, a tradition inaugurated by Gustav Heinemann (1969–1974). 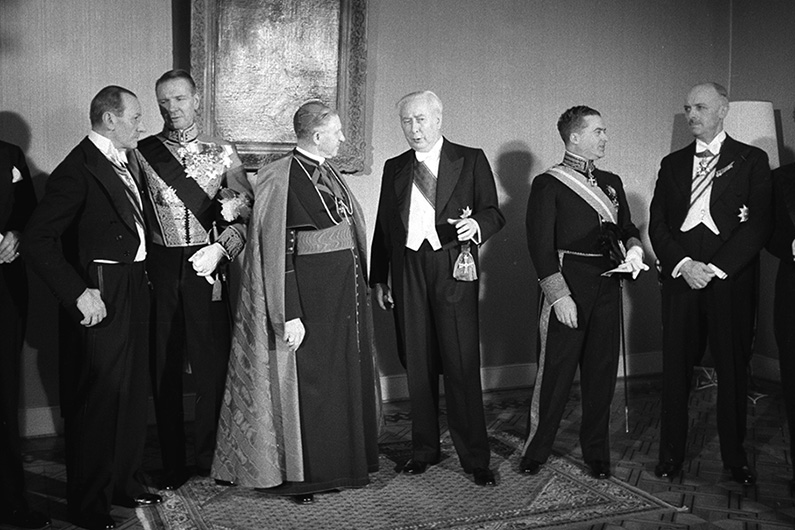 ... that the driveway leading up to Villa Hammerschmidt was not enlarged until 1976? The Bonn newspaper General-Anzeiger stated that “the ceremonies that usually unfold at Cologne/Bonn airport during state visits can now be held without difficulty in front of the President’s official residence. (...) Until now, it had been necessary for the honour guard and the Staff Band of the Bundeswehr to line up on a sloping lawn, which was conducive neither to the precision of presenting arms nor to the sound quality of the national anthem”.