In the early summer of 2003, 50 years after the start of its broadcasting, "Deutsche Welle" moved from Cologne to Bonn, 2018.
Stiftung Haus der Geschichte/Benjamin Westhoff

Originally intended as a parliamentary office building, the edifice known as the Schürmann-Bau was damaged by flooding in 1993 while under construction. As the German capital would soon be transferred to Berlin, the government decided to convert the building into an ultra-modern broadcasting centre for the "Deutsche Welle".

Shortly before the fall of the Berlin Wall in November 1989, a number of new buildings went up in the government quarter of Germany’s temporary capital city of Bonn. These buildings included the chamber "Deutscher Bundestag", the Bundeskunsthalle and the Haus der Geschichte, all of whose cornerstones were laid between 1987 and 1989. 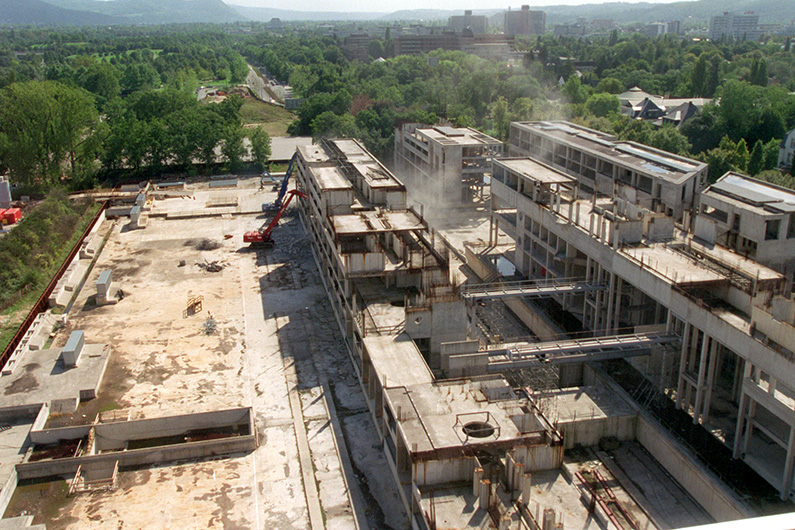 After the Rhine floods of 1993, the Federal Government decided not to tear down the heavily damaged "Schürmann-Bau", but to complete it in a modified form for "Deutsche Welle", 1997.
dpa - Fotoreport

Another significant building in this group was the Schürmann-Bau, which was named after its Cologne-based architects Margot and Joachim Schürmann and was designed to serve as an adjunct parliamentary office building to the "Langer Eugen" office tower. Construction of the Schürmann-Bau got underway in 1989, six years after the architectural competition for the project.

A Bundestag resolution that was adopted in the wake of German reunification called for construction on the building to resume. But on the night of 21 December 1993, heavy Rhine flooding extensively damaged the unfinished structure. Water from the basement of the Schürmann-Bau – which later on became a kind of trophy purchase that was bottled and called “1993 Christmas floodwater” – compromised the building’s foundation so severely that there was doubt as to whether construction could actually go forward.

On 11 October 1995, after much debate, the federal cabinet adopted a resolution calling for the building not to be razed, but instead to be repurposed for "Deutsche Welle". Work on this project began in 1997. In June of 2003, Germany’s foreign broadcast service moved into the Schürmann-Bau from its former building in Cologne. The Schürmann-Bau has 160,000 square metres of office space. With its white cuboid forms and elongated edges, the building’s architecture is reminiscent of the Bundeshaus.