The building of the Federal Audit Office was erected in 1953/54 as the seat of the Federal Ministry of Post and Telecommunications.
akg-images/Bildarchiv Monheim

Federal Court of Auditors since 2000

Located on a former factory site on the Rhine, the Ministry of Post and Telecommunications building (1953–1954) was the first ministry edifice to be completed in Bonn. It is now the Federal Court of Auditors’ building.

The Bundeshaus, where, in the postwar period, democratic government in the Federal Republic of Germany first saw the light of day in 1949, and Zweite Fährgasse, which housed a stoneware factory until the 1930s, are about a mile apart. The first new headquarters of a postwar ministry, that of the Ministry of Post and Telecommunications (1953–1954), was built on the site of this factory, whose last customer before closing down was Villeroy und Boch. 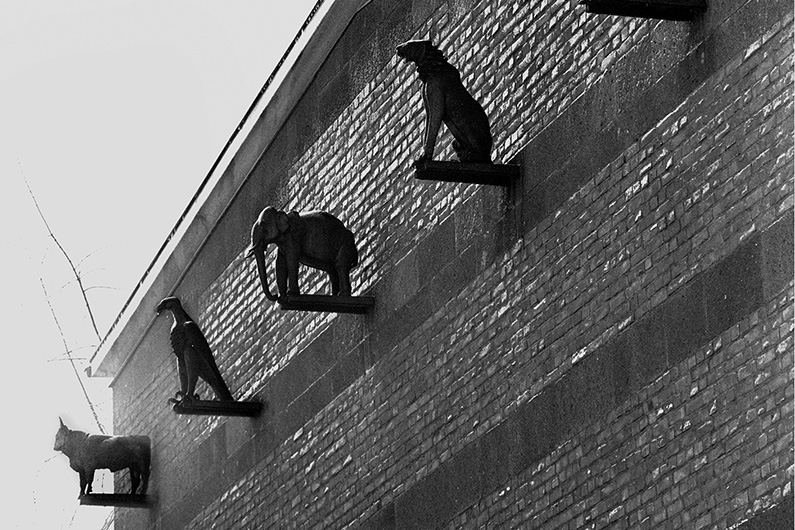 The bronze sculptures by Hans Wimmer decorate the façade of today's Federal Audit Office on its Rhine side, 1962.
Bundesregierung/Egon Steiner

The building was conceived as a gateway to the world. Five Hans Wimmer bronze sculptures of animals constitute the only embellishment on the building’s facade, which faces the Rhine. Each of these animals, which are mounted in the back of the Kontinentensaal hall – which was originally designed to also serve as a concert and cultural event venue for the city – symbolises a continent. Collectively the animals symbolise the global reach of the German Post – which back then was state-owned, with the Ministry of Post and Telecommunications acting as its “head office.”

When planning for the new headquarters got underway in 1950, the Ministry of Post and Telecommunications staff was still working out of Bonn’s Altes Stadthaus on Bottlerplatz. The new buildings that were ultimately constructed on Fährgasse were intended to be part of the new government district that extended from here to the south; it was hoped that they would form the northern boundary of the district. The new Ministry of Post and Telecommunications building was ready for occupancy in late 1954 – and indeed only one year later, the new Foreign Ministry building was completed, just to the south. These two edifices, along with the Pedagogical Academy, which was subsequently repurposed as the Bundeshaus, the Ministry of Finance on Rheindorfer Straße (1951–1954), and the Presse- und Informationsamt (Office of Press and Information) on Welckerstraße (1954–56), constitute the few government buildings to be completed in Bonn before a construction freeze was imposed in 1956.

The Ministry of Post and Telecommunications symbolises a communications era that had nothing along the lines of e-mail, mobile phones or private-sector courier services. In contrast, this era was characterised by letters, postcards and stamps, rotary-dial phones, phone boxes, public debates concerning the phone charges and the price of postage stamps, a second TV station (in black and white of course), and the advent of postal codes – which in 1962 attested to the hope that Germany would be reunified some day, as a specific numerical range of postal codes were to be set aside for East Germany.

This period is as long gone as a divided Germany with Bonn as its capital. In 1989 the government demerged Deutsche Bundespost (federal post office) and split it into three separate public undertakings: Bundespost Postbank, Bundespost Postdienst and Bundespost Telekom. But unfortunately, the massive bureaucracies of these undertakings weren’t a good fit with Europe’s free markets and the emerging information age. Thus, five years year later, the so called second postal reform ushered in privatisation, which resulted in DHL, Postbank and Telekom all being headquartered in Bonn. Privatisation was architecturally embodied by the Post Tower (2002), which was within hailing distance of the Lange Eugen office tower. The Ministry of Post and Telecommunications, which in 1988 moved from the city centre to a new building near the Rhine, dissolved itself on 31 December 1997. 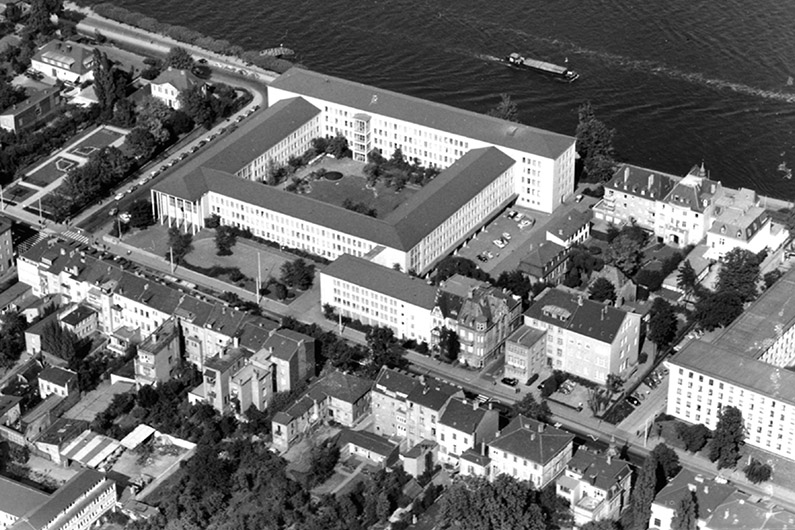 However, the office building on the corner of Zweite Fährgasse and Adenauerallee did not remain vacant for long. Its first tenant, in 1988, was the Foreign Ministry. And in 2000, the Federal Court of Audit, previously headquartered in Frankfurt, took over the building – a compensatory measure promulgated by the Berlin/Bonn Act.

Like the sculptures of animals behind the building, the bronze plaque that still adorns the entrance to its bright foyer was by Hans Wimmer. Even in an era in which a government post and telecommunication monopoly is as unthinkable as restrictions on global communication the plaque, shaped like a postal seal, displays the Federal Eagle and the inscription B(undes) M(inister) A(nno) D(omini) MCMLV (“Federal Minister the Year of our Lord MCMLV”). It has been hanging there since 1955, the year in which Germany’s national sovereignty was reinstated.

… that sculptor Hans Wimmer, who made the works of art in the Ministry of Post and Telecommunications building, in 1964 also designed the holocaust memorial titled Mahnmal für die Opfer des Naziterrors (“Memorial to the Victims of Nazi Terror”) at Frankfurt’s Paulskirche? On the pedestal of the sculpture, which is of a kneeling figure whose crossed (and bound) wrists are raised above her head, the names of 53 concentration campss are inscribed.